After thousands of ColorOfChange members raised their voices, we won on our diversity disclosure ask! On July 23, Twitter published a blog post revealing the company's demographic numbers (copied below). Like much of the tech industry, it has a long way to go.

As a next step, we've invited Twitter to work with ColorOfChange and our allies in hosting a public forum that addresses the company's plan to recruit and retain more Black, Latino, and woman talent -- sending a bright signal that inclusion and diversity are real priorities for the social media giant. To achieve our second ask, we need a lot more folks to get involved. The ColorOfChange community got Twitter to disclose its diversity data. Together we can win again and push the tech industry toward real inclusion at every level.

If you haven't done so, join this campaign to the right and make sure to share it on Facebook. 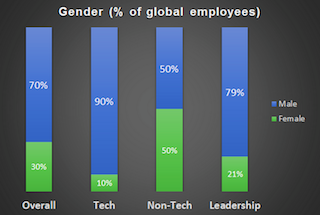 The graphs are a bit hard to read (you can click to enlarge), so here are the numbers across the company:

Last year, when confronted with criticism about his appointment of an all-white, all-male Board of Directors Dick Costolo, the CEO of Twitter, responded with a dismissive, joking tweet.

It's been months now since Costolo's defensive response and although Twitter later added a white woman board member to it's exclusive club, (2) the company has yet to publicly address the failure to appoint a single Black person to its board despite data that confirms that Black folks make up a disproportionate share of Twitter's user-base.

Much worse, in recent weeks as other Silicon Valley tech companies like Facebook, Yahoo, Google and LinkedIn took the historic first step to release depressing data about the racial and gender composition of their staffs, Twitter has remained silent -- refusing to jump on the data-release-bandwagon. (3)

That's why we're joining with Rev. Jesse Jackson and the Rainbow Push Coalition to call on Twitter to do two things: 1) release your employee diversity numbers immediately and 2) signal your commitment to real inclusion by hosting a public community forum that addresses the company's plan to recruit and retain more Black talent. Will you join us? It only takes a minute.

To date, most of the data disclosures have confirmed that Silicon Valley prefers its workers to be male and either white or Asian. (4, 5) And although Twitter is unlikely to break any diversity trends that have emerged, transparency and making a public commitment to improving the recruitment and retention of Black employees are critical first steps.

Though its minority representation numbers may mirror other Silicon Valley tech companies, Twitter has a very unique role to play in this national conversation about hiring discrimination. Although not on the payroll, Twitter's platform -- via the cultural force known as "Black Twitter" (6, 7, 8) -- has been built off the creativity of Black people and, as such, the company owes our community more -- more transparency, and a more thoughtful solutions-oriented approach that addresses its failure to be more inclusive without blaming Black people.

Unfortunately, many of the tech companies (and their pundits) have been quick to incorrectly blame a leaky "talent pipeline" for the extreme racial hiring disparities revealed by these disclosures; pointing to statistics about the dearth of computer science degrees awarded to Black men and women and bragging about their own philanthropic-investments in tech education for minorities.  Silicon Valley apologists are working to divert blame.

We cannot allow a corporate culture that seems hell-bent on making excuses for its replication of tired "good ol' boy" networks to malign the intellectual and creative capacities of Black people in the process.

2. "Twitter appoints first woman, Marjorie Scardino, to board of directors"

3. "Some in Silicon Valley Publicize Diversity, While Others Shy Away"

4."Silicon Valley Firms Are Even Whiter and More Male Than You Thought"

6. "Black Twitter: A virtual community ready to hashtag out a response to cultural issues"

7. "Mama I Made It: Pew Poll Study Confirms The Existence of Black Twitter"