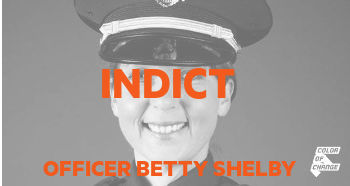 Terence Crutcher needed help. But instead, he got a bullet.

On Friday night, Terence, a father of four, was on his way home from class at Tulsa Community College when his car stalled in the middle of the road. Someone called the police. And instead of helping him, officers jumped out of their vehicles with guns drawn while helicopters circled in the sky filming the entire incident. The officers in the helicopter can be heard on video saying he "looks like a bad dude. He must be on something."

Terence died because he was Black. There's no other reason for someone to be killed by police when they are unarmed, walking slowly away with their hands up. He posed absolutely no threat. To make matters worse, after Officer Betty Shelby killed him, Tulsa Police let Terence Crutcher bleed out on the street, while they went to console and comfort Officer Shelby. He later died in the hospital.

This kind of continued disregard for Black life is enraging. Officer Betty Shelby killed someone. She should not be on administrative leave, sitting at home collecting a paycheck. Terence Crutcher's family and local activists in Tulsa are calling for Officer Shelby to be arrested and criminally charged. Let's join them and make sure this officer is held accountable.

Below is a letter we will send on your behalf to District Attorney Steve Kunzweiler:

I am writing to demand that your office indict Officer Betty Shelby for killing Terence Crutcher, an unarmed father of four, who posed no threat to her.

Terence Crutcher needed help from Tulsa Police after his car stalled, not a bullet. However, it is clear from the recording of the officer calling Terence "one bad dude" that Tulsa Police Officers considered him a threat before they even left their vehicles. He was walking away with his hands up. There is no reason he should have been shot and killed.

The people of Tulsa are counting on you to do the right thing and hold Tulsa police accountable. You must indict and fully investigate Officer Shelby for her role in the killing. Police are not above the law, and when someone kills someone, today's law states that they should be arrested--not at home on paid administrative leave.