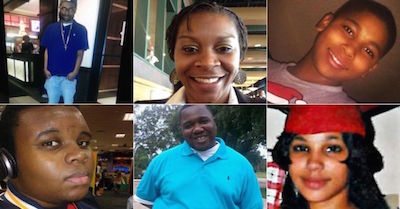 Neither Alton Sterling nor Philando Castile did anything to justify being killed by the police. But that hasn’t stopped national news outlets from criminalizing and dehumanizing these two fathers – explicitly diverting attention away from the actions of the police officers.

We’ve seen this with Trayvon Martin, Tamir Rice, Sandra Bland, Michael Brown, Freddie Gray and so many others before. National media outlets victim-blaming Black folks for their own deaths and perpetuating a narrative that they had it coming, that because they “were no angels” that they deserved to die.

Enough is enough. It’s time for our community to pressure national news outlets to reassess their coverage policies around incidents of police killings and to stop victim-blaming practices like detailing past criminal history of victims and sharing old mugshots.

To executives of national media outlets across the country:

National news outlets play a significant role in perpetuating the culture of police violence against Black people. The repeated dehumanizing and criminalizing of Black victims of police brutality on national news ensures that police and the public continue to see Black folks as violent people who deserve police brutality.

To ensure accurate news coverage that does not perpetuate the stereotypes and narratives that drive police terror and violence against Black people, we ask that you commit to reassessing your coverage policies around incidents of police killings and to stop victim-blaming practices by ceasing to cover and detail the unrelated past criminal history of the victim and ceasing to use old and unrelated mugshots for victims of police violence.

Accurate news coverage of police killings of Black people should not be treated as isolated incidents but should be used as an opportunity for national media to discuss the state of police terror and police brutality in this country.

Without concrete commitments to these basic changes in your coverage policies, your national outlet will continue to perpetuate the narratives that because these Black folks “were no angels” or that they had previously committed a crime, that they deserved to die.