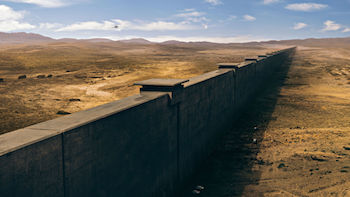 Donald Trump's budget will be released tomorrow and he's backed down from wall proposal because he's feeling the pressure. But now he wants to make backdoor deals to remove funding for the wall in exchange for more border "security and technology." We must urge Congress not to compromise.

But we can't stop now! He wants to make backdoor deals to remove funding for the wall in exchange for more border "security and technology." We must urge Congress not to compromise. This wall could cost $70 billion and border patrol and new technology could cost more, not to mention the safety and environmental hazards of building this wall over common flood areas. These programs and more are being sacrificed for the sake of "public safety", but how is a multi-billion dollar wall do more for safety than clean air and water or police accountability?

We need your help urging Republicans and Democrats to stop battling about who would be at fault for the government shutting down and realize their constituents, American voters, are the ones being punished. A few leading Democratic Senators have gone on record saying they would support more funding for border security, but we say NO COMPROMISE. This budget is still a dangerous document that would ultimately put all of our safety in jeopardy.

It's time that Congress hears straight from us! Urge your Congressperson to #BanTheBudget

This is the message we'll send to your members of Congress on your behalf.

I am asking you to take a stand and say no to funding Trump's hate. His budget with or with funding for the wall is a disaster and will be a direct attack on us, your constituents. Trump is using this budget plan as a way to mainstream his actual disdain for liberty and justice for all. We're asking you to not compromise on this budget, vote no.

Overall, Trump's budget proposals are dangerous and threaten the safety and livelihoods of some of the most vulnerable Americans. We should not be asked to sacrifice things like meals for the elderly and after school programs for kids to fund Donald Trump's useless pet projects.

Stand up to Trump and tell him no money for the border wall.