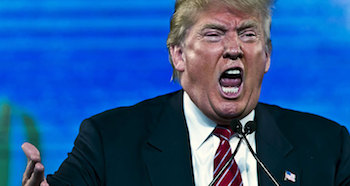 Last week, footage was released of Donald Trump bragging about committing sexual violence. Along with former Access Hollywood host, Billy Bush, Trump boasted that he “doesn’t even wait” before groping women’s genitalia and forcing his mouth on them.

Now, Hollywood insiders like Bill Pruitt, ex-producer of Trump’s Celebrity Apprentice are stepping up publicly saying that Trump’s grotesque remarks were just the tip of the iceberg--and that there are tapes that are “much worse.” Apprentice producers followed Trump for hours each day--catching him in his most openly racist and sexist moments. Rumors persist that in the unleaked tapes, Trump proudly uses racial epithets--veteran reality TV producer, Chris Nee tweeted that “Apprentice” cast and crew confided that there are recordings of Trump using “the n-word.”

However, we may never see those tapes because Trump friend and “Apprentice” creator, Mark Burnett, who also currently serves as the President of MGM Television, has refused to release them citing vague contractual agreements.

They're protecting Trump-- and while Mark Burnett and MGM Television waffle on the alleged legality of releasing the tapes despite other media moguls calling them out for lying; one thing is clear-- non-disclosure agreements do not protect illegal activity and a racially hostile work environment rife with sexual harassment is not legal in America.

Today, we are demanding that advertisers on "The Apprentice" take a stand against rape culture and stop advertising on the show until the tapes are released. Sexual assault is not a joke and if there are tapes that are worse than bragging about committing sexual violence, the American people deserve to hear them.

Below is the letter we'll send to "Apprentice" advertisers on your behalf:

Recently, lost footage from Access Hollywood revealed Trump bragging about committing sexual violence. Now, Hollywood insiders like Bill Pruitt, ex-producer of Trump’s Celebrity Apprentice are stepping up publicly saying that Trump’s grotesque remarks were just the tip of the iceberg--and that there are tapes that are “much worse.” However, Mark Burnett and MGM Television refuse to release the tapes citing vague contractual agreements.

I am writing to ask you to stop advertising on "The Apprentice" until Mark Burnett and MGM Television relase the tapes.  If there are tapes with more disturbing and inflammatory remarks, we deserve to hear them.

By continuing to advertise on "The Apprentice" despite Mark Burnett and MGM TV's protection of Donald Trump’s fanatic misbehavior, you are choosing a side. Instead of honoring cherished American values of openness and transparency; you are siding with the secretive cronyism and protection of wealthy bigots that has plagued our political system for too long.

Donald Trump is no longer just a brash and bigoted reality television star, he is the Republican nominee for President of the United States. He must be held accountable for hate speech and bigotry and should not be coddled just because he has friends in high places. Please stop advertising on "The Apprentice" until the tapes are revealed.