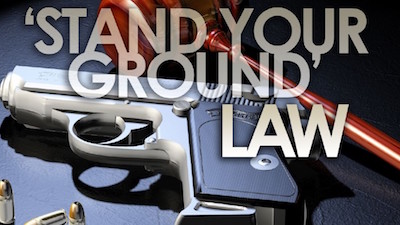 In 2013, the country was appalled as George Zimmerman was acquitted in the killing of Trayvon Martin as a result of Florida’s 'Stand Your Ground' Law. Since then, we have had to watch as Zimmerman has remained in the news through run-ins with law enforcement, racist statements, and efforts to capitalize off of killing Trayvon through a celebrity boxing match and auctionong off the gun used to kill Trayvon.

Sadly, Zimmerman has become an enduring symbol of the physical and political violence, hate and injustice happening to Black people in our country. Now conservatives and the gun lobby are again pushing ‘Stand Your Ground’ legislation in even more states - providing cover for race-based violence and trigger-happy vigilantes like Zimmerman.

The Missouri legislature has passed a crime bill that was expanded by Senator Kurt Schaefer (R-Columbia) to protect killers like Zimmerman. Adding a “Stand Your Ground” measure to the bill, Schaefer believes that people should be able to legally claim fear made them shoot people while on their property or in a public space. The bill is now in the hands of MO Governor Jay Nixon who must decide whether or not to veto.

As we saw with the killings of Trayvon Martin, Jordan Davis, Mike Brown, Rekia Boyd, Tamir Rice, Mike Brown, and many others, an  illegitimate fear of black people, including children, is already a justification for killing them in many courtrooms in America. ‘Stand Your Ground' laws make it even easier to get away with violence against Black people.

'Stand Your Ground’ laws are also not applied equally. Black people are far less likely to succeed when using it as a defense. As we saw in the case of Marissa Alexander, even a Black woman firing a warning shot in the presence of a former abuser was not able to take advantage of the same defense that allowed Zimmerman to get away with murder.

Here's the letter we'll send to Gov. Nixon on your behalf.

I am writing to ask you to veto the 'Stand Your Ground' Law moving fast through the MO Legislature.

After the 2012 killing of unarmed, 17-year-old Trayvon Martin, policy experts and legislators began examining ‘Stand Your Ground’ laws that undermine public safety. In states that have these unjust laws, white people who kill Black people are 354% more likely to be cleared of wrongdoing than whites who kill other whites. Stand your ground puts people, especially Black people, at risk. Even the Department of Justice has called for the laws to be re-examined or abolished.

As we saw with Trayvon Martin, Jordan Davis, Rekia Boyd, Mike Brown, Tamir Rice and many others, an illegitimate fear of black people, including children, is already a justification for killing them. ‘Stand Your Ground’ laws make it easier to get away with violence against Black people.

I urge you to fight back against this deadly law and veto it when it come to your desk.