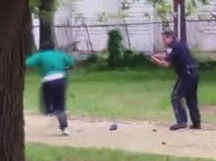 The Post and Courier's inital reporting on the murder of Walter Scott by Officer Michael Slager exemplifies a media landscape that blindly trusts the word of law enforcement, inadequately examines police brutality cases, and stereotypically defines Black people by criminality.

Rather than keeping South Carolinians informed and holding accountable those in power, the Post and Courier assisted local police in disseminating false truths and protecting a murderer.

Demand the Post and Courier issue a public apology immediately.

This is the letter we'll send to the Post and Courier's Executive Editor on your behalf. Feel free to add a personal comment in the space provided.

Rather than fairly presenting both sides of a still-developing story, Knapp's initial piece tries and convicts the victim, Walter Scott, by overemphasizing Michael Slager’s version of events, as well as Scott’s irrelevant criminal record. All the while, it was Officer Slager who needed to be under the microscope.

The shooting death of Walter Scott -- and the ensuing cover up -- reflects a law enforcement community in disarray. In the past five years, South Carolina police have fired weapons at 209 people and not one officer has been convicted. This is a state in crisis; the last thing Black South Carolinians need is for the Post and Courier to act as the public relations arm of police departments in dire need of very serious reforms.