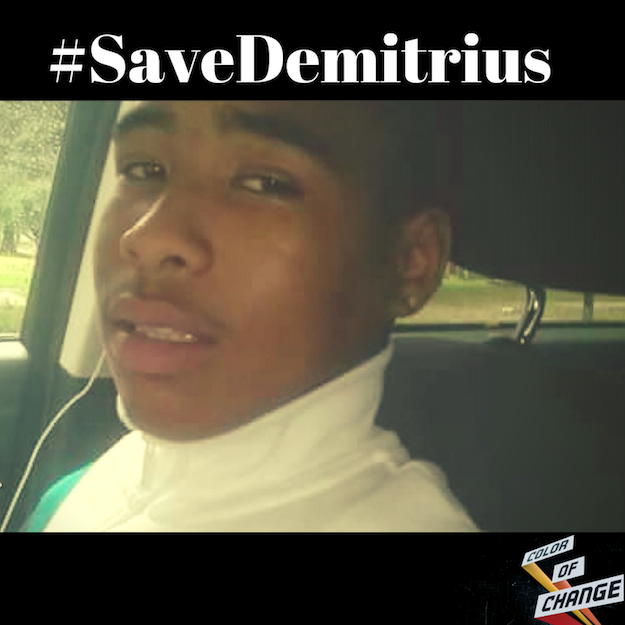 Demitrius Manderfield is being tortured in a Michigan jail and may potentially die if he does not receive help. Demitrius is 20-years-old and is suffering from the painful and chronic illness sickle beta thalassemia. He has not been convicted of any crime, yet has been caged behind bars for over a year now. To make matters worse, he’s jailed at Midland Federal Correctional Facility and they have been denying him access to proper healthcare for three months now. His judge, Judith Levy, promised that she would release him for treatment if his medical needs weren’t being met in jail. But it’s been weeks and nothing has been done. His health is steadily declining and his family desperately needs your help.

Jails in the United States are known to be danger zones for people with disabilities --especially Black folks.  Sandra Bland, Darren Rainey, and Ralkina Jone have all died behind bars because jail workers and jail health practitioners have no empathy for Black people who are perceived as criminals. By refusing to provide chronically ill inmates with medical treatment, jails are literally sentencing people to the death penalty before a judge has even charged them with a crime.

Demitirus’ court date is in seven days, but his mother and family worry his illness may not even allow him to live long enough to stand before Judge Levy again.

Tell Judge Judith Levy: Save Demitrius Manderfield! Release him from Midland Federal Correctional Facility so he can receive proper treatment for his chronic illness!

Demitrius Manderfield is 20-years-old and is suffering from the painful and chronic illness sickle beta thalassemia. He is currently jailed at Midland Federal Correctional Facility in Ann Arbor, Michigan and hasn’t received any treatment for his condition in months. His family and community is terrified that he will die if he does not receive treatment.

You stated that you will release Demitrius if the jail does not meet his health care needs. And the jail has proven since December that they are not providing him adequate treatment.

We demand you release him now for treatment before he dies a painful, torturous death in Midland Federal Correctional Facility.