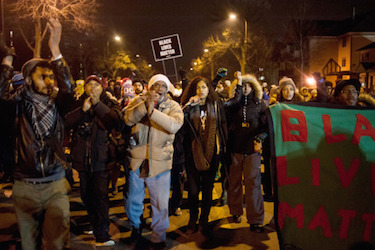 Last night, alleged white supremacists shot and critically injured 5 Black Lives Matter protesters who were peacefully protesting the brutal police killing of Jamar Clark in Minneapolis. This latest act of vigilante violence comes after days of documented threats from white supremacists towards the protesters, with no public response from police.

Enough is enough. Minneapolis police have a long history of racial discrimination in the force — in fact the police union president has ties to white supremacist organizations. Our national leaders must be held accountable for stopping this war on Black people.

Join us in urging President Obama to do more to address white supremacist terrorism, starting with urging Attorney General Loretta Lynch to investigate the Minneapolis Police Department and this latest act of violence as a hate crime.

This is the letter we'll send to President Barack Obama and Attorney General Loretta Lynch. and the Minnesota Department of Public Safety. Feel free to add a personal comment in the space provided.

I am writing to demand your leadership in addressing white supremacist violence in the United States.

On November 23rd, alleged white supremacists shot and critically injured five Black Lives Matter protesters who were peacefully protesting the brutal police killing of Jamar Clark in Minneapolis. In the past few days, videos and statements on social media have documented white supremacists threats towards protesters, with no public response from local police officers. In addition, Minneapolis leadership has ties to white supremacist groups and a long history of terrorizing Black residents.

This type of unconscionable police violence and racist vigilante violence has no place in our country. As President, you have prioritized plans for addressing ISIS, but have not done enough to deal with the homegrown anti-government terrorists and white supremacists who have killed twice as many people since 9/11.

I urge you to do everything in your power to address white supremacist violence, starting with urging Attorney General Loretta Lynch to investigate the Minneapolis Police Department and this shooting of protesters as a hate crime.