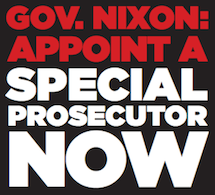 It’s been more than two months since Officer Darren Wilson shot and killed 18-year-old Mike Brown — and no one has been held accountable.

A grand jury announcement in the case against Officer Wilson is expected any day now — and reports seem to indicate that he will not be charged for his brutal action.

It's painfully unjust and a direct result of Governor Nixon's failure to lead. But there is still time for Governor Nixon to do what is right. Join us in increasing pressure on Gov. Nixon to intervene and secure a special prosecutor before it's too late.

This is the message we will send to Governor Nixon. You can add a personal comment using the box provided.

I am writing to urge you to secure a special prosecutor in the case against Officer Darren Wilson. On Aug. 9th, 2014, Officer Wilson racially profiled and killed 18-year-old, unarmed Black teenager, Mike Brown. His family and several eye-witnesses called it an execution.

Since Mike's death, a shocking level of police and prosecutorial corruption, unprofessionalism, racial prejudice, and violent police repression has prevented state officials from holding Officer Wilson accountable. With your support, County Attorney Robert McCulloch has done everything in his power to prevent justice for Mike Brown, denying his family the fair and just trial for their son's killing that they deserve.

Any day now, a grand jury announcement is expected in the case against Officer Wilson. But it is never too late to do what is right. As Governor, you have both the responsibility and influence to restore integrity to Missouri's justice system and ensure prosecutor McCulloch steps aside and appoints a special prosecutor. I urge you to take action immediately.

What will you do in this moment, while the whole world is watching?