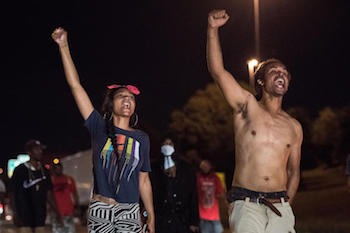 None of the video shows definitive evidence of Keith Scott holding a gun as police have claimed--and after police shot and killed Keith Scott, they handcuffed his lifeless body. To make matters worse, Putney has still refused to release the full video, claiming it is not relevant to the shooting. A partial video release is not enough, but if this killing happened a week from today, even this would be impossible.

A new North Carolina law goes into effect on October 1st, and will prohibit any body-cam or dash-cam footage from being released to the public. It's infuriating and a slap in the face to Black people who've been in the streets demanding transparency and reform.

Charlotte is on fire. And Black people are in pain yet again as the news of Keith Lamont Scott’s killing hit less than 24 hours after news outlets plastered the video of Terence Crutcher’s murder on tv screens across the country.

According to his family, Keith Lamont Scott, a 43-year-old disabled man, was sitting in his car reading a book and waiting to pick his son up from school when he was shot and killed by Charlotte police. But Charlotte police are telling a completely different tale of events leading to Keith’s killing. And a new North Carolina law could mean the public will never see the body cam footage.

North Carolina just passed a law, HB 972, that prohibits body and dash cam footage from being released to the public. And while the Charlotte-Mecklenburg Police Chief, Kerr Putney, has the authority to release the footage of Keith Lamont Scott’s death before the law goes into effect in October--he won’t. But the good news is that the Department of Justice has the authority to push them to do the right thing, and hit Charlotte police where it hurts--their pockets. Soon, the Justice Department will be announcing winners of their federal grant programs. If they refuse to award any new grants to North Carolina while this law is in place, they could force the state to reverse it. Will you sign the petition?

Below is a letter we will send on your behalf to U.S. Attorney General Loretta Lynch:

I am writing to demand that your office refuse to award new grants to North Carolina until its new law, HB 972 is overturned.

Keith Lamont Scott was simply sitting in his car in a parking lot waiting for his child to get off from school. The Charlotte police acted in complete disregard for his life, shot and killed him. Now his children are without a father and a family is seeking answers.

North Carolina has now implemented a law that prohibits the public from seeing police dash camera and body camera footage. This goes against any effort towards police transparency and accountability and only furthers  secrecy of deadly outcomes on civilians by hands of police.

The people of  North Carolina trust you will do the right thing and hold police departments accountable. You must put a moratorium on new grant funds to North Carolina until it overturns this dangerous law and end the secrecy from the public. Communities should not experience harm and violence from police. Police departments should not be rewarded with money if they cannot act with integrity and continue to inflict violence on Black people.