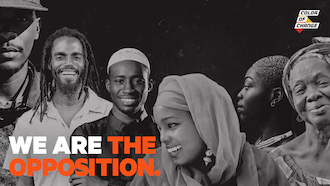 STAND WITH IMMIGRANTS: The ICE raids have started. Trump is ripping families apart. There is no "wait and see."

Trump signed an executive order that targets cities across the U.S. that are taking a stand to make sure immigrants do not live in fear. Trump is stripping federal funds from cities that declare themselves a "Sanctuary City." This will affect the 3.8 million Black and Brown immigrants who seek and deserve safety and full protections.

And it doesn't stop there: Trump has signed more executive orders targeting Black and Brown immigrants and refugees. Trump just signed an an executive order that places a temporary ban on refugees and a suspension of visas for immigrants from Muslim-majority countries such as Syria, Iraq, Iran, Libya, Somalia, Sudan and Yemen. Just this week, he signed three executive orders that will embolden the power and authority of law enforcement and threaten the movement for police accountability. Trump won’t stop until all immigrants live in fear, and are banned, detained, deported, and ostracized indefinitely. This fight is only the beginning. But we can’t let it deter us. And we can't let our cities' mayors give in.

Below is the letter we will send to 300 "Sanctuary City" Mayors:

Trump is following through on a dangerous promise that intends to rip many families apart. There is no “wait and see.”

Trump just signed an executive order stripping federal funds from cities, like yours, that have declare themselves a Sanctuary City.1 This will affect millions of Black and Brown immigrants who seek and deserve safety and full protections. We are counting on you to never back down or give in. Protect our communities from Trump's hatred and bigotry.

However, this is just the beginning of what we need from you. Too many “sanctuary cities” still grapple with state sanctioned violence against and pervasive criminalization of Black and Brown people.

We must go beyond sanctuary.  For our communities, it means:


It’s important that all Black people feel safe and live with dignity. We're counting on you to keep taking a stand for us.
Sign the Petition