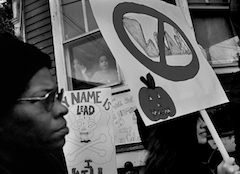 Across the US, predominantly Black and low-income communities are at dire risk of severe health problems caused by lead poisoning. Despite this, federal funding for the Center for Disease Control’s Healthy Homes and Lead Poisoning Prevention Program has been reduced by more than half. It’s unacceptable: the federal government needs to take action to ensure that Black and low-income communities are protected from environmental hazards that negatively affect their health and livelihoods.

Tell the US government to restore funding for the Center for Disease Control Healthy Homes and Lead Poisoning Prevention program in the Fiscal Year 2017 budget.

I’m writing you as the Executive Director of ColorOfChange.org. We're the nation’s largest online civil rights organization with more than one million people working for positive social change and racial progress. I'm writing because the governor of Michigan has been forced to declare a state of emergency in order to deal with a lead poisoning crisis that has devastated the majority Black community in Flint. The number of children with dangerous levels of lead in their blood has doubled in just one year as a result of prolonged exposure to toxic, lead-tainted water. A state of emergency will allow the Michigan state government access to federal funds in order to resolve this crisis, but long term solutions must be found and implemented. Restoring funding for the Center for Disease Control (CDC) Healthy Homes and Lead Poisoning Prevention program in the Fiscal Year 2017 budget would be a significant first step towards ensuring that no other community faces the same risks.

In 2012 CDC research determined that there is no safe level of lead exposure and that exposure can cause irreversible damage in children. Yet funding for the CDC Healthy Homes and Lead Poisoning Prevention Program has been eroded from a Fiscal Year 2005 high of $36 million to only $15 million for Fiscal Year 2016. A deeper understanding of the risks of lead and other environmental hazards is only useful if we are willing to devote the necessary resources to mitigate those dangers and safeguard the vulnerable. The best way to do so is to restore funding CDC Healthy Homes and Lead Poisoning Prevention Program to Fiscal Year 2005 levels of at least $35 million, along with a continuing resolution to guarantee that amount for at least 5 years as part of the Fiscal Year 2017 budget. Additionally, the federal government should encourage state and local governments, as well as the Environmental Protection Agency, to adopt the updated CDC standards on lead exposure levels in order to accurately assess the risk of health problems in vulnerable communities. This way we can ensure that funds are being utilized in the most accurate and efficient manner, and assisting communities with the most urgent need.

We need your support in order to protect the health and well-being of Americans all across the country.

Lead poisoning is not just an issue in Flint, Michigan. In Baltimore, Cleveland, and Detroit, thousands of children have been irrevocably harmed by exposure to lead paint and other toxins in their homes. Often this occurs in majority Black and low-income communities, left vulnerable to pollution due to racism and discrimination which constrains their social mobility and economic opportunity. Due to these factors, Black people often rely on social support programs to bridge the gap in affordable housing, comprising 45% of low-income public housing inhabitants. Yet studies indicate 35% of all low-income housing had significant lead-based paint hazards. Of those with hazards, 1.2 million units housed low-income families (less than $30,000 per year) with children under 6 years of age. With each passing day more and more Black families are impacted by lead poisoning, which diminishes their quality of life and impairs their potential.

The adoption of the Paris Accords by President Barack Obama signals a recognition of the need to adapt to new environmental standards and work to create a safer, healthier future for all. Part of that effort must include cleaning up pollution and other environmental hazards that impact not only our health, but the potential and safety of children around the country. When we support programs which ensure that all Americans have safe homes to reside in, safe water to drink, and safe food to eat, we ensure that our future will be a brighter one. Will you act with us on behalf of America’s potential?