Follow @KilledByCops and demand a national database of all those who have been killed by law enforcement. 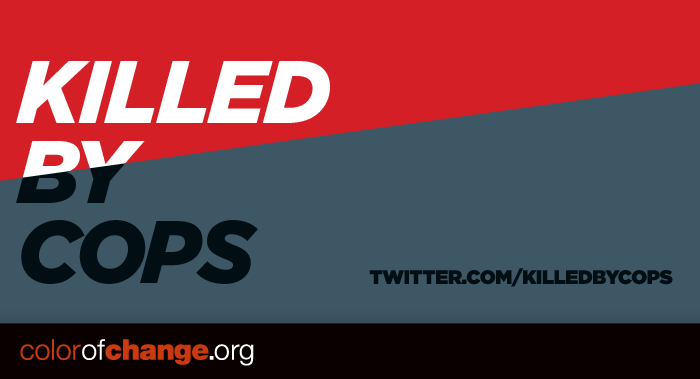 Michael Brown, an 18-year-old unarmed teenager, was one of many Black folks killed by police each year. According to the FBI, local police kill Black people at least two times a week, on average. But other estimates put that number to around once per day. Following the momentum of the growing new racial justice movement to end discriminatory policing, Congress has just passed a bill requiring the Department of Justice to gather nationwide data on police shootings and killings, broken down by race, gender, and age. As of today, there is no federal database on police use of force.

If enough people follow and interact with @KilledByCops, we can maintain a national spotlight on the scale of police use of force and increase pressure on President Obama and Attorney General Eric Holder to sign this new bill into law and improve data collection and oversight.

@KilledByCops will tweet instances of people killed by law enforcement in recent years — calling attention to the lack of a comprehensive, publicly-accessible, national database that tracks these incidents. The project is not a commentary on all individual cases, but a way to highlight the many questions that remain unanswered; how many people are killed a year, where were they killed, what was their race, who was the killer, and what policies can we enact to increase the safety and outcome for both police and civilians? In order to move forward the right solutions we need to understand the problem.

In addition to other federal policing reforms, the public has a right to know the scale of police killings nationally. It's time to demand that the FBI or other federal agencies develop a national database of police encounters, and require local law enforcement to report police stops, arrests, use of force, and killings. A national database will allow federal officials to identify patterns of misconduct, hold individual officers and departments accountable when necessary, address the policies that incentivize police brutality, and implement reforms that allow law enforcement to do it’s job while respecting the lives and dignity of all communities.

Will you join us in demanding federal reforms to end abusive policing that targets Black and brown communities?

Read the statement below, and then sign the petition!

Thanks for spreading the word about @KilledByCops.