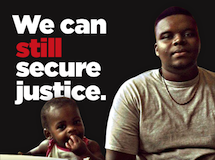 Today, a St. Louis Grand Jury refused to indict Mike Brown's killer — Police Officer Darren Wilson. On Aug. 9th, the nation was horrified to learn that Mike Brown was racially profiled and brutally killed by police as he walked down the street with a friend. His family called it an execution.

Now his killer may never be held accountable — unless President Obama and US Attorney General Holder take action. The Department of Justice has the power to arrest and prosecute Officer Wilson under federal criminal charges. Raise your voice today to ensure our national leaders step in where Missouri's politicians have failed, and secure justice for Mike Brown immediately.

Here's the letter we'll send to the Obama administration and US Department of Justice. You can add a personal comment using the box provided.

I urge you to do everything in your power to secure justice for Mike Brown and an end to the nationwide crisis of discriminatory police violence. A St. Louis Grand Jury has refused to indict Officer Darren Wilson who targeted and killed 18-year-old Black teenager, Mike Brown, more than 3 months ago.

Numerous eye-witnesses say Mike Brown was brutally murdered — fatally shot more than 6 times as the 18-year-old teenager stood with his hands in the air. His family called it an execution. Now, Missouri Governor Nixon, County Attorney Robert McCulloch, and Missouri law enforcement have failed our country.

I call on you to arrest and prosecute Officer Darren Wilson to the fullest extent of federal law, and to defend protesters 1st amendment right to free speech. Unless you take action, Officer Wilson will remain free and law enforcement across the country will be vindicated in their discriminatory and violent targeting of Black Americans.

No parent should ever experience the agony of losing a child to discriminatory police violence — only to be denied justice for their devastating loss. But according to FBI statistics, law enforcement kill Black Americans at nearly the same rate of Jim Crow Era lynching. This devastating crisis cannot continue.

We are in a historic time; Mike Brown's death has inspired a powerful, youth led movement to end the nationwide crisis of police brutality and what you do in this moment will have a major impact on the future of racial profiling and police brutality in America.

As President and US Attorney General, you have both the power and responsibility to secure justice for Mike Brown and systemic reforms to law enforcement. I urge you to take definitive action to indict Officer Darren Wilson and to overhaul the local and state policies and practices that led to Mike Brown's death, as well as those that perpetuate the nationwide crisis of discriminatory policing.