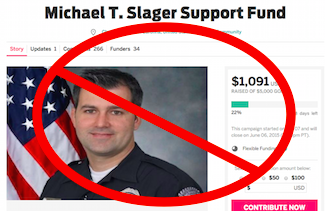 After 50,000+ ColorOfChange members spoke up, Indiegogo took down all the fundraisers in support of Michael Slager, the police officer who shot Walter Scott eight times while he was trying to run away - killing him - and then tried to cover it up.

We're glad that Indiegogo is no longer allowing Officer Slager to profit from his horrendous actions, but we want to make sure that next time there is no delay or hesitation in taking down other such disturbing fundraising drives.

Sign this petition urging Indiegogo to change its policies. We'll take your signatures and comments into an upcoming meeting with the company's CEO.

Here's the letter we'll take to Indiegogo's CEO during our meeting. You can add a personal comment using the box provided.

Thank you for removing all Michael Slager fundraisers from Indiegogo. Such disturbing efforts have no place on one of the most popular crowdfunding platforms in the country. They exacerbate a culture that celebrates violence against Black folks while villifying Black victims, and justifying their deaths.

In the future, we hope that you will remove any similar fundraisers from your platform immediately, without any hesitation or delay. To ensure this, I urge you to officially change Indiegogo policy.