*UPDATE* - After 54,000+ ColorOfChange members spoke up, all the Officer Slager fundraisers were removed from Indiegogo. This is an important win, but we need to ensure that such disturbing fundraising drives are taken down without any hesitation or delay in the future.

Click here to urge Indiegogo to change its policies. We'll take your signatures and comments into an upcoming meeting with the company's CEO. 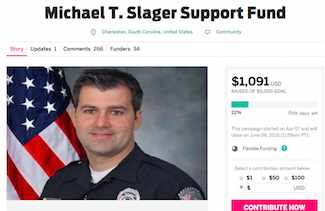 The online fundraising platform Indiegogo is enabling Officer Michael Slager to profit in the aftermath of killing Walter Scott, an unarmed Black man that Slager shot eight times while he was trying to run away.

Join our campaign demanding that Indiegogo remove ALL Michael Slager fundraising pages from their platform immediately. So far Indiegogo is refusing to do so.

Indiegogo is defending the fundraising drive by using language that we’re all too familiar with. The company is claiming that they’re an “open” platform and they "don’t judge the content of campaigns."

Last year we launched a campaign targeting GoFundMe after they made a similar argument about being a “neutral technology platform.” GoFundMe failed to take down a fundraising drive in support of Darren Wilson, which raised over $430,000 and which the company profited from.

But after 130K ColorOfChange members spoke up - and after a couple months of consistent pressure - GoFundMe donated these profits to the Ferguson-Florissant school district. Months later we know that GoFundMe remembers our campaign. When a similar Michael Slager fundraiser was started on their platform this week, GoFundMe took it down immediately. This is the power of collective action.

Here's the letter we'll send to Indiegogo's CEO on your behalf. You can add a personal comment using the box provided.

I write demanding that you remove any Michael Slager fundraising pages from your platform immediately.

Officer Slager shot Walter Scott eight times - killing him - and then lied about what happened. It's morally reprehensible that he would be allowed to profit from these actions on Indiegogo.

These types of disturbing fundraising efforts have no place on one of the most popular crowdfunding platforms in the country, especially one that claims not to be a "place for hatred." Profiting off Walter Scott's murder is not okay.