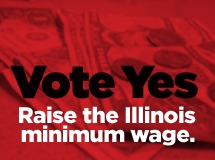 This November, Illinois voters have the opportunity to pass a referendum, Public Act 098-0657, demanding an increase in the minimum wage — which has been stuck at $8.25 since 2011.

A minimum wage increase could be the difference between struggling to make ends meet and living a more fulfilling life. It is time to tell Illinois political leaders that $8.25 is just not good enough.

Join us and vote YES on the Illinois minimum wage increase on November 4th.

Here’s a letter affirming your pledge to vote yes on the Illinois minimum wage increase. You can add a personal comment using the box provided.

I pledge to vote yes on increasing the minimum wage in Illinois. An increase in minimum wage could mean a boost in living standards, economic growth for the state, and a reversal in the trend of income inequality that has grown over the years for more than 400,000 Illinois residents.

Hard-working people would no longer be faced with tough decisions such as choosing between buying groceries for the week or paying the electric bill. In addition, an increase would also reduce government spending. For example, fewer people would need to rely on programs such as SNAP, which would reduce government spending by $46 billion in over 10 years.

This is why on November 4th, I will vote yes to a minimum wage increase in Illinois and demand fair wages for all Illinois residents.