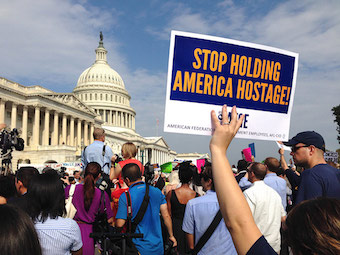 Temperatures are rising around the world with no sign of stopping. Polluting disasters are putting communities across the country at risk. Our decades old infrastructure is crumbling, unable to bear the burdens of modern society and deprived of resources needed to replace it. And at the center of all of those problems, Black communities and other communities of color are left vulnerable to the worst effects of climate change and environmental racism. There are policies that could stem the tide and begin to create a sustainable world that protects our health and supports our prosperity. But for them to become law, the Republican Party must stop standing in the way of progress.

We, the undersigned, are writing because you, and many of your colleagues in the Republican Party, have stood in dereliction of duty of your responsibilities as a congressional representative. Efforts by the Obama administration to strengthen the Environmental Protection Agency (EPA) through the creation of the Clean Power Plan or refining the Clean Water and Clean Air acts have been stymied by the obstruction and obstinance of your party. All around the country, natural disasters like the Houston flood and the drought in California are placing Americans in dire danger. At the same time, pollution, climate change, and other environmental hazards are degrading their quality of life. This goes doubly for Black communities, who are often the most vulnerable and the least supported.

Your part in deadlocking the legislative houses of the U.S. government are directly contributing the suffering and hardship of millions. It must come to an end.

Clean, breathable air. Safe, drinkable water. An economy built on a foundation of environmental sustainability, ensuring that we all have the opportunity to prosper while also protecting the planet we will bequeath to future generations. Things that all Americans deserve and which require a minimal investment to make a reality. The longer that we go without these changes, the more vulnerable the nation becomes to climate change, extreme weather events, and environmental hazards. Each of these issues limits the capacity of government to to ensure that all Americans live healthy, stable, and safe lives. Communities are left to grapple alone, without the resources or recourse needed to adequately protect themselves. This must end.

Attempts to undermine law through hidden additions or addendums always end up vetoed. Yet empty political grandstanding and symbolic victories only prolong the dangers that Black communities face from environmental racism. Black children suffer disproportionately from asthma, and are seven to eight times as likely to die of asthma as white children. Communities of color face nearly 40% more exposure to toxic air pollution than white communities. Environmental racism continues to place minorities in close proximity to pollution and other environmental hazards. As long as GOP obstruction rules the day, the government can’t act to protect Black communities from climate change, pollution, and other environmental hazards. We can’t allow this to continue.

As a Congressional representative, you have an obligation to serve the needs of all of your constituents, not just those who voted for you or who are in your party. The time for partisan pettiness is at an end. Will you support a brighter environmental future for all Americans?