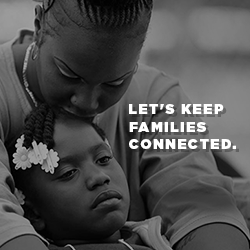 The fight for prison phone justice is 15 years in the making. Now the FCC is on the verge of ensuring that no one has to sacrifice basic necessities in order to afford staying in touch with loved ones in prison.

Here's the statement we'll send to the Federal Communications Commission regarding FCC Docket #12-375. The FCC is required to review every comment submitted, so we strongly encourage you to personalize your comments using the box in the form:

Two years ago, the Commission took a necessary step to stop the extortion of money from the loved ones of people in prison using the only way they have to connect--through private phone service providers operating in prisons. By capping the rates for phone calls made between states to prisons, these family and friends of incarcerated people are able to save precious dollars and still have the chance to connect with their loved ones. However, the 2013 rule that you established did not address the high cost of making a phone call to an in-state prison.

By now, the Commission is well-versed on why this is such a critical issue: keeping in contact with family is a key way to ensure an person’s success once he or she has served their term and returns to the community. This issue also disproportionately impacts Black people in the United States; one in nine Black children has a parent behind bars. And overall, it’s a constant challenge for 2.7 million children in our country to maintain contact with an incarcerated parent. We also know that after committing the same crimes, Black people on average receive longer sentences to federal prison than white people. The prison phone racket has negative effects on all communities, but this injustice hits Black communities especially hard.

The Commission took the first step by adopting rate caps for prison phone calls between states. With this preliminary rule, phone rates fell so much that call volume increased by as much as 30 percent in some places. With this new comment and rulemaking period on addressing local prison phone calls, you have the opportunity extend these benefits even more.

I urge the Commission to take immediate action to limit costs for local phone charges in the prison phone industry. The success of our returning citizens--and their families--rely on it.