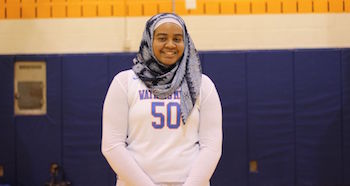 Call the NFHS and #StandWithJeNan

Sixteen year old, Je’Nan Hayes had spent months practicing basketball on the varsity team--and played in all 24 games throughout the season. But on the day of her final championship game, a referee banned her from the game. The reason? As a practicing Muslim, she wears a hijab. The referee was enacting an anti-Muslim rule in the National Federation of State High School Associations' handbook which outlaws religious headwear unless the player has a signed waiver from the state.

But the rule inherently singles out Muslim teenagers and other religious minorities--why should they need permission to wear garb that is essential to the practice of their faith?  Especially because there has never been a recorded incident of a hijab being a safety hazard during a basketball game. And even the state governing body is backing Je’Nan up, stating that she should have been allowed to play in the game. But as long as the rule exists, it leaves Muslim students open to irregular enforcement by referees who may or may not be anti-Muslim. No child should be denied the fruits of their labor due to religious practice. That’s why it’s time for the National Federation of State High School Associations to stop targeting Muslim teenagers and lift the ban on hijabs and other religious headwear now.