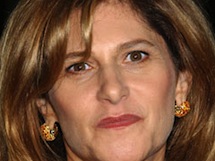 Outrageous, leaked email exchanges unearthed last week feature Sony co-chair Amy Pascal and producer Scott Rudin guessing what the President’s favorite films are: “Django,” “12 years,” “Or the butler. Or think like a man?,” “Ride Along. I bet he likes Kevin Hart.” In another exchange, she asserts that TV deals are "the new Black baby" in Hollywood, in essence likening Black children to some disposable, fad accessory like a trendy watch or the latest iphone.

Pascal’s comments are confirmation of the manipulative, exploitative relationship corporations like Sony have with Black folks. Our genius, our cultural products, and our $1.1 Trillion in buying power are not given the respect they deserve, regardless of the massive sums of money they result in for people like Amy Pascal.

We must hold Pascal accountable here; not just for her horrendous comments, but also for her role at the helm of a corporate agenda that views Black America as one big, lucrative joke.

Join us in demanding that Amy Pascal be relieved of her duties at Sony Pictures Entertainment immediately.

This is the letter we'll send to Sony Pictures Entertainment on your behalf. Feel free to leave a personal comment in the space provided.

Her comments -- which included speculation about President Obama's taste in films (“Django,” “12 years,” “Or the butler. Or think like a man?,” “Ride Along. I bet he likes Kevin Hart.”) as well as the assertion that TV deals are "the new Black baby" in Hollywood -- seem to confirm a manipulative, exploitative relationship corporations like Sony have with Black folks.

With so many incredible Black entertainers contributing their time and talents to Sony pictures -- and Black audiences giving millions of their hard-earned money to your films as well -- Pascal's behavior is a truly intolerable slap in the face.