Corporations: It's time to drop the Clippers and their racist owner

Corporations: It's time to drop the Clippers and their racist owner 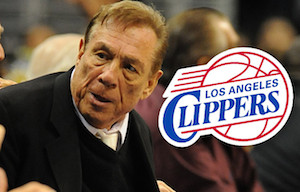 Los Angeles Clippers owner allegedly Donald Sterling told his girlfriend he doesn't want her to bring Black people to games or broadcast her associations with Black people on Instagram, according to a phone recording recently posted on the internet.

In the course of a nine minuate call, Sterling berates his girlfiend apparently for posting an Instagram picture with Lakers legend Magic Johnson.

"Why are you taking pictures with minorities? Why? It's like talking to an enemy. Hispanics feel certain things towards blacks. Blacks feel certain things toward other groups [...] It will always be that way. [...] It bothers me a lot that you're associating with black people. [...] You're supposed to be a delicate white or a delicate Latina girl. [...] You don't have to have yourself walking with black people."

These remarks are only the most recent in a long history of Sterling's racial animosity which led to former General Manager Elgin Baylor to claim Sterling runs the Clippers with "the vision of a Southern Plantation structure."

Sterling has a long history of racial discrimination against Black and Hispanic potential tenants in Southern California real estate properties. In two separate racial discrimination cases, one a federal prosecution the other a civil case brought by tenants rights' advocates he has paid record penalties worth millions of dollars for his systematic refusal to accept Black and Hispanic housing applicants. Court documents reveal he believes, "Black tenants smell and attract vermin."

No one with such openly-hostile views towards Black people should be allowed to profit in a league where more than 75% of the players are Black.

Black viewers represent a larger share of the NBA audience than any other major U.S. sport. The NBA and the Clippers share several corporate sponsors which rely on Black NBA fans for business. Once authenticity of the recording is confirmed, NBA commissioner Adam Silver should use his power to remove Sterling as owner of the Clippers.

UPDATE (11:02AM PT 4/28/14): Virgin America and KIA have also announced they are dropping their Clippers sponsorship.

UPDATE (9:33AM PT 4/28/14): Two companies, State Farm and CarMax, have already ended their sponsorship of the Clippers. We are encouraged by this news and look forward to seeing other corporations do the right thing and follow suit. Corporations have a choice. They can either continue aligning with Donald Sterling, or stand up and end their association with Sterling and his racist, dehumanizing language and actions.

UPDATE (11:48AM PT 4/27/14): A longer version of the recording has been released, which allegedly features Sterling saying of the Black Clippers players "I support them and give them food, and clothes, and cars, and houses. Who gives it to them? Does someone else give it to them? Do I know that I have—Who makes the game? Do I make the game, or do they make the game?"