In the 3 months since the in-custody death of 16-year-old Gynnya McMillen at Lincoln Valley Detention Center, we have learned that Kentucky is operating a juvenile detention center in crisis, with a staff that has demonstrated a clear contempt and indifference towards the young people in their custody.

After local activists and ColorOfChange members pressured the Governor into releasing the video of Gynnya's time at Lincoln village, the state's own Public Safety Secretary had to admit that the video was filled with examples of falsified reports, failed supervision and outright indifference on the part of detention center staff.

In less than two days at Lincoln Village, staff failed to do proper checks on Gynnya, placed her in a martial arts hold, delayed administering CPR when they found her unresponsive, ate food intended for her, and lied on reports pertaining to her care. 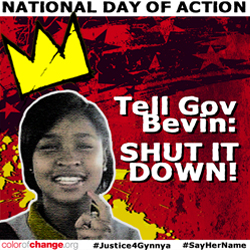 The investigation also exposed a broken surveillance camera that failed to capture key footage of the martial arts hold that may have triggered Gynnya's death, as well as the lack of vital training amongst staff. Even the facility's nurse admitted, during a taped 911 call, that she was unfamiliar with the center's required CPR protocol, causing a delay in potentially life-saving efforts.

The detention staff's negligence reflects the ways in which Kentucky systematically fails Black youth every day. In Kentucky, Black youth are more than four times as likely as white youth to spend time in a juvenile detention facility.

Now more than 10% of Lincoln Village staff are under indictment, suspension or investigation. So far, the Governor has refused to fire the facility superintendent, leaving activist with no choice but to demand the shut down of the entire detention center.

Join us in calling on Governor Bevin to close at Lincoln Village Detention Center.