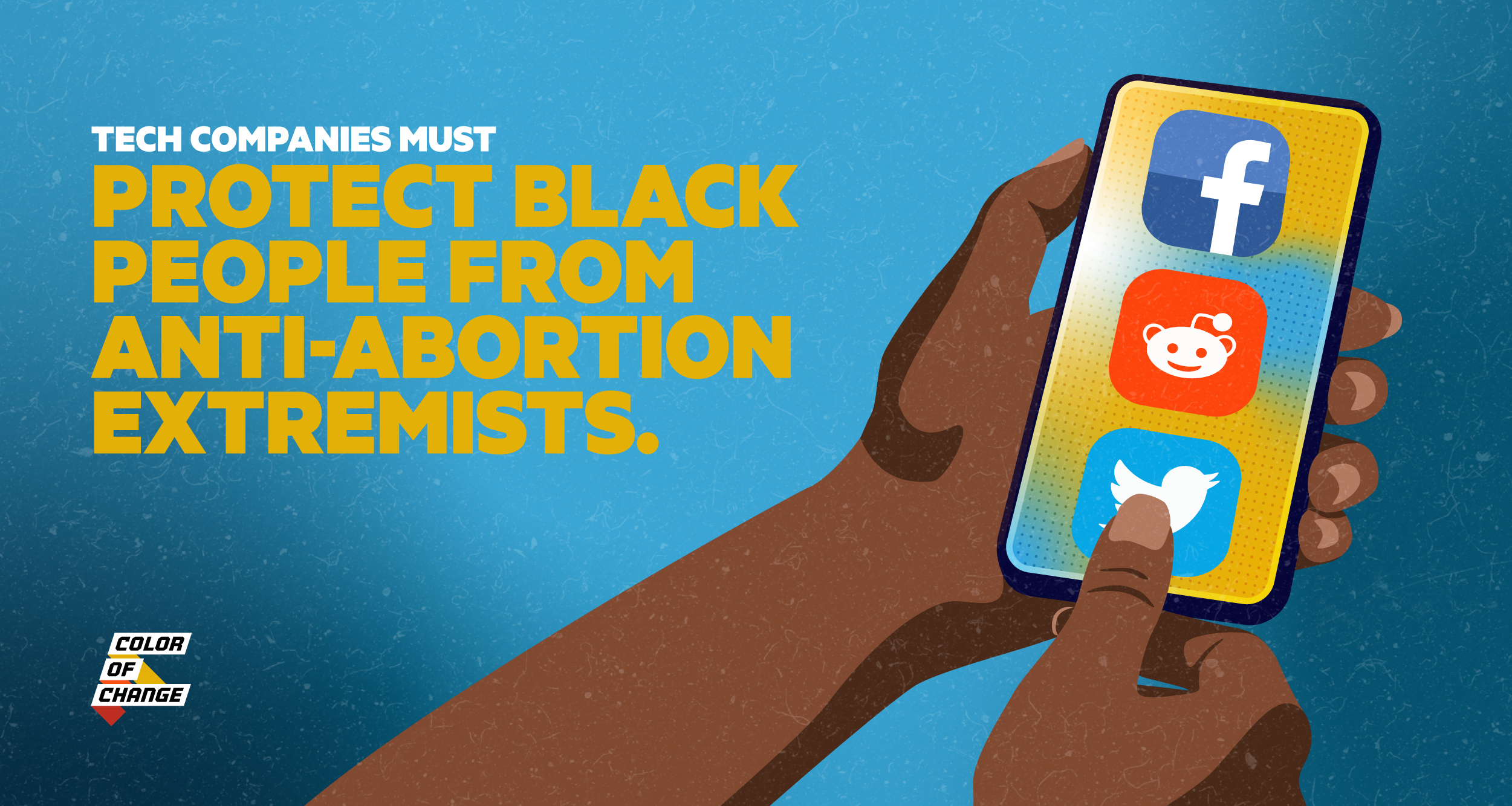 UPDATE: On June 24, the Supreme Court overturned Roe v. Wade—eliminating the constitutional right to an abortion which was upheld by the court for nearly half a century. Overturning Roe not only infringes on the bodily autonomy of Black people but our privacy. This puts the right to contraception, legalized same-sex marriage, and other 14th Amendment rights at risk.

When Texas passed the Senate Bill 8 (TX SB 8), it provided a financial incentive for private citizens anywhere in the country to become bounty hunters to enforce a six-week abortion ban. Several states, such as Alabama, have already passed abortion bans, while other states, such as South Dakota, have introduced copycats to TX SB 8.

Anti-abortion extremists have used social media and tech platforms like Reddit, Twitter, and Facebook to coordinate the harassment and bounty hunting of people seeking abortions. With Roe officially struck down, these anti-abortion forces will exploit every flaw in these platforms to make them even more hostile places for Black people seeking reproductive and sexual health care. Considering the historic failures of social media platforms to protect Black people specifically, Black people seeking abortions will overwhelmingly be the target of these bounty-hunting and harassment efforts if tech companies do not act.

We are looking to tech companies to prioritize the safety and well-being of Black people when the law does not. While several companies have already taken action against this law, Facebook and Twitter have yet to take action, and there is room for Reddit to implement guidelines that further prevent abortion bounty hunting. If these companies do not take action, they will be in violation of their own community guidelines around harassment.

Demand these tech companies to take action to prevent users from harassing and invading the privacy of women, people seeking abortions, activists, and medical professionals.

The overturning of Roe v. Wade will promote coordinated harassment of Black people seeking abortion services. We’ve already seen anti-abortion extremists use your platforms to coordinate the harassment and bounty hunting of women and people who need access to abortions. This is a direct violation of your community guidelines and standards.

With the highest rate of abortion, and the historic failures of social media platforms to protect Black people specifically, Black people seeking abortions will overwhelmingly be the target of these bounty-hunting and harassment efforts if tech companies do not act.

Several companies, such as GoDaddy, have already taken action against Texas Senate Bill 8. Your companies need to catch up and take firm action.

We are demanding that your companies explicitly prohibit content that encourages anti-abortion bounty hunting, explicitly prohibit efforts to use the overturning of Roe to harass or invade the privacy of women, abortion activists, and medical professionals, an ban the sharing and posting of URLs of bounty hunting platforms, such as Texas Right to Life, from your services.

Tech companies must prioritize the safety and well-being of Black people when this law and the behavior it encourages do not.