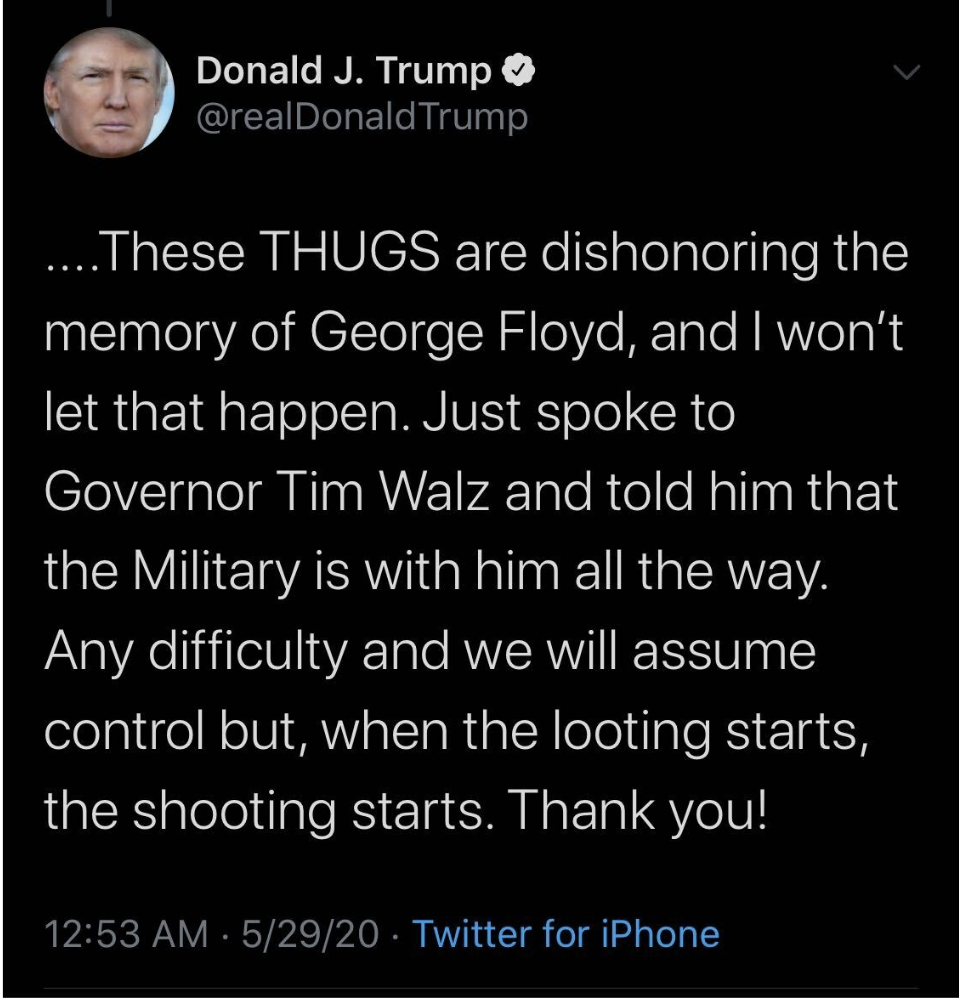 Donald Trump threatened protestors with death, tweeting “When the looting starts, the shooting starts." Yes, you read that right. Trump is actually advocating for the National Guard to use deadly force against Americans who are protesting against police killings. And while Twitter placed a label on the Tweet stating that it was inciting violence--it's not enough. How much longer will Twitter let Donald Trump manipulate and misinform millions, inspire hate crimes, and embolden violent white supremacist terrorism using Twitter?

Trump has always used his Twitter page to spread lies to his 80 million followers, and during the global crisis his tweets can reach an increased audience. Recently, he falsely accused the state of Michigan of illegal voter fraud, calling the Secretary of State rogue and threatening to withhold funding to the state. Trump’s outlandish tweets are bound to further endanger the state government which recently faced armed protesters taking over the state capitol.

By allowing him unlimited access to its platform, Twitter is essentially telling Trump he does not have to follow any of their rules and he thrives on that. To make matters worse, elections in many states will rely on the very mail-in ballots that Trump is falsely tweeting about. His ability to spread mass voter misinformation on Twitter will only aid his plans of being re-elected. Americans have suffered enough under the Trump Administration. The global crisis has exposed more than ever how Trump’s lies throughout the pandemic have led to countless preventable deaths of Americans, most notably Black people. It’s time for Twitter to take a real stand for the well-being of the people that power its platform.

Enough is enough. Twitter needs to stop empowering Trump with the tool to spread his hate-filled commands to millions of people everyday. #KickTrumpOffTwitter

Donald Trump has historically violated your terms of service with impunity. Trump’s tweets have endangered the lives of millions of Americans, from his rants cheering on white supremacists to now advocating for the National Guard to use deadly force against Americans who are protesting against police killings. In the midst of a global pandemic and election year, there is no excuse for allowing this dangerous user to exploit your platform It’s time to finally kick Trump off Twitter for good!