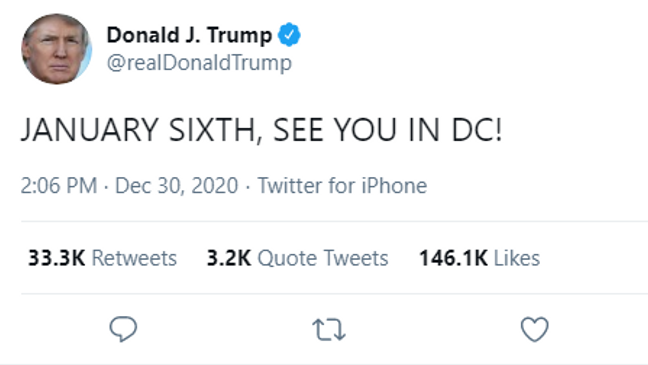 On Wednesday, thousands of violent insurrectionists stormed the Senate building and interrupted the procedural certification of the Presidential election. Shots were fired into the Senate chamber leaving one woman dead. Senators, staffers, and building employees feared for their lives as Trump-crazed gunmen took over the offices. All because Twitter allowed Donald Trump to use their platform to organize and facilitate Wednesday’s chaos. What will it take?

We first demanded that Twitter ban Trump in 2017 when he used the platform to escalate nuclear war. Since then, he’s used Twitter to target private citizens, lie about the coronavirus pandemic, threaten peaceful protesters with violence, and falsely accuse states of illegal voter fraud. Twitter has provided Trump with a megaphone to manipulate and misinform millions, inspire hate crimes, and embolden violent white supremacist terrorism. For weeks, white supremacists and hate groups have openly schemed in preparation for Wednesday, planning for violent confrontations and threatening elected officials that stood in their way. Now, we’ve reached a pitch-level of chaos and violence. Enough is enough. #KickTrumpOffTwitter

Donald Trump has historically violated your terms of service with impunity and now, as a result of his promotion and facilitation of Wednesday's chaos, insurrectionists have stormed our Senate building leaving Senators, staffers, and building employees fearing for their lives. Trump’s tweets have endangered the lives of millions of Americans, from his rants cheering on white supremacists to now advocating for the National Guard to use deadly force against Americans who are protesting against police killings. There is no excuse for allowing this dangerous user to exploit your platform It’s time to #KickTrumpOffTwitter.