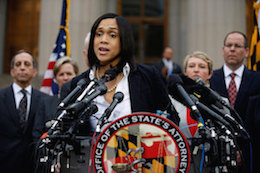 The people of Baltimore have had enough. Over just the last 4 years, police have killed 109 people in the city. And in 2014, 100% of the people killed by Baltimore police were Black. Baltimore — like most cities in America — has a long and ongoing history of violent, discriminatory and illegal policing.

Following the tragic police killing of 25-year-old Freddie Gray the people of Baltimore rose up and moved State's Attorney Marilyn Mosby to charge all 6 officers who killed Freddie Gray. But while the police who killed Gray are out of jail, hundreds of protesters languish in overcrowded, inhumane jail conditions facing unjust criminal charges and outrageous bail.

Urge State's Attorney Marilyn Mosby to drop the charges against all protesters.

Below is the letter we'll send to Baltimore State's Attorney Mosby on your behalf. You can add a personal comment using the space provided.

I am writing to thank you for pursuing criminal charges against the officers who killed Freddie Gray. I cannot say how much this means. In the midst of rampant police violence against Black women and men, it is important to me that our city officials work to ensure that killer cops are held accountable.

After Freddie Gray's death, thousands of protesters took a stand and spoke out against the brutal violence of Baltimore police officers. And now, in an ironic twist of events, protesters are being criminalized for speaking out against state-sanctioned violence. This is unacceptable.

Please, continue to be the voice of justice and protect the voices of those of us who are frustrated with a system that continues to abuse our families and loved ones.

I urge you to drop the charges against all protesters and be an advocate for those of us tired of the violence in our communities.