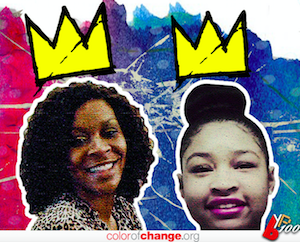 It's been a year since activist #SandraBland was found dead in her jail cell after she was violently attacked by Officer Brian Encinia, and nothing has been done to ensure Encinia or the jailers who neglected to check on her are held accountable. While we have continued to demand justice for Sandra, other Black women (cis and trans) and Black girls have continued to die at the hands of the police.

On May 10, Symone Nicole Marshall died after being taken to a Texas jail instead of the hospital after a car accident. On January 11, 16-year-old Gynnya McMillen died after being unjustly detained in a Kentucky youth jail. And last year, Joyce Crunnell died from dehydration after being arrested while seeking care at a South Carolina hospital for a stomach illness.

In response to the silence from media outlets to expose the police violence happening toward Black women (trans and cis) and Black girls, the Black Youth Project 100, Black Lives Matter, Ferguson Action and Project South declared May 19, 2016 as a #SayHerName National Day of Action to end domestic and state violence toward Black women, girls and trans women. On this day, ColorOfChange stood with allies to deliver over 193,000 petition signatures to Kentucky Gov. Matt Bevin to demand justice for Gynnya McMillen and the next day we worked with BYP100 and Black Lives Matter in Washington, DC to conduct an action targeting the Department of Justice.

It is now time to take our efforts to the next level. We're calling on Vanita Gupta, assistant attorney general for the Civil Rights Division at the Department of Justice to open investigations on the Black girls, women and trans women who have died while in custody and from state violence.

Violence toward Black girls and women receives significantly less mainstream media coverage. Even the death of Sandra Bland didn't initially receive the coverage it deserved. It was the advocacy of ColorOfChange members and activists across the country, that pushed Sandra’s case to the forefront of mainstream media attention. We must do the same for other Black girls, women and trans women whose families are calling for state accountability and a Department of Justice investigation.

Will you stand with us to #SayHerName?

The below letter will be delivered to Vanita Gupta on your behalf:

I am writing to demand that you respond to the families of Black women, girls and trans women who are calling for an open investigation for their loved ones who were murdered by police or died while in custody.

There are currently no federal investigations open for any Black women, girls or trans women who were killed by the state. The Department of Justice needs to value all Black lives, including girls, women and trans women like Gynnya McMillen, Sandra Bland, Wakiesha Wilson, and Symone Marshall.

As the United States Assistant Attorney General for the Civil Rights Division you have the power and responsibility to ensure justice all people and stop neglecting Black people -including Black girls, women and trans women.