Tell Georgia That Voting Is Not A Crime! | ColorOfChange.org 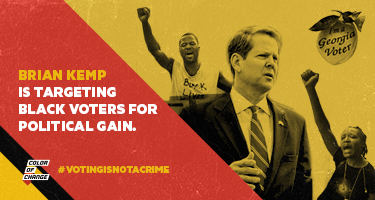 Secretary of State Brian Kemp recommended that Attorney General Christopher Carr charge fourteen canvassers with a felony facing up to ten years in prison and a one-hundred thousand dollar fine, for incorrect voter registration forms. The investigation concluded in February of 2017 but he decided to wait until now at the September 2017 State Election Board meeting to announce his findings to benefit his quest for the Republican nomination for Governor.

There were just 53 allegedly false voter registration applications out of the more than 86,000 submitted by the New Georgia Project that year -- just 0.06% errors. The New Georgia Project is an outstanding organization that has registered 130,000 young people and people of color to Georgia's voter rolls since 2014 and it's unfortunate that Kemp is attacking them for taking on a role his office intentionally fails to do: register new voters. It is unfortunate that Brian Kemp is using his office to score political points in his quest to become the next Governor of Georgia and attacking his potential opponent, Democratic gubernatorial candidate, and  House Minority Leader Stacey Abrams, who founded the New Georgia Project and launched its voter registration efforts in 2014. If Kemp’s office was actually interested in expanding the electorate and ensuring Black people, young people and communities of color were registered to vote, there would be no need for the New Georgia Project to run complicated and labor intensive voter registration drives for tens of thousands of new voters each year.

Brian Kemp is attacking Georgians’ freedom to vote to manipulate the process for political gain and to ensure that people who oppose his and Donald Trump’s right-wing agenda aren’t able to vote in the first place. The Pence-Kobach Commission is making an obvious attempt to nationalize voter suppression efforts even further and Brian Kemp is doing everything he can to aid them by prosecuting canvassers working to register the people of Georgia. We need your help now to nip this voter intimidation and suppression in the bud.

Brian Kemp and Republican support for the Pence-Kobach Commission, voter ID laws, racially biased gerrymandering and reducing polling places in Black communities all point to a concerted effort to reduce our electoral power. Voting freedom in Georgia is being targeted as a part of this national trend. It is now up to Attorney General Carr to oppose this political persecution. We must show up to fight for our freedom to vote. Tell Attorney General Carr not to file charges against the 14 canvassers in Georgia!

Voting is not a crime, Attorney General Carr do not charge volunteers for helping the people of Georgia register to vot