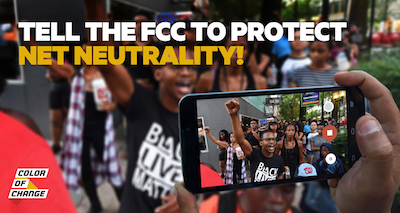 FCC Chairman Ajit Pai has begun his plan to kill the open internet. The Chairman’s plan to gut the FCC’s net neutrality rules will devastate Black communities. Net neutrality is essential to protecting our free and open Internet, which has been crucial to today’s fights for civil rights and equality. Our ability to have our voices heard in this democracy depends on an open Internet because it allows voices and ideas to spread based on substance, rather than financial backing. We will not stand by silently as Chairman Pai solidifies his role reigning over Trump’s FCC by following through on Trump’s campaign promise to dominate the web by closing the open Internet.

Now more than ever, the voices of everyday Black people, are needed in this fight. And we are joining with allies to send the FCC a clear message with petition signatures in support of net neutrality. Net neutrality is what allowed us to call attention to injustice in Ferguson, and lead a national conversation on racism and police accountability. It is what allows us to speak out against Trump’s FCC and help build an unignorable opposition. Unless enough of us speak out now, we could fall right into Trump and Pai’s plan and lose one of the most powerful platforms we’ve ever had to fight for justice and equality.

Dear Chairman and Commissioners of the FCC,

Net neutrality has made the Internet a level playing field for all voices. For Black folks, this has been crucial. For the first time in history we can communicate with a global audience — for entertainment, education, or political organizing — without prohibitive costs, or mediation by government or industry. The way our voices can travel online has become such a fact of life that it can be easy to take for granted — but these liberties are now being challenged by the Chairman. We urge you to hear our voices and maintain the classification of the internet as a public utility and uphold net neutrality.