Tell Congress: Protect the Census and ensure a full count

Tell Congress: Protect the Census and ensure a full count 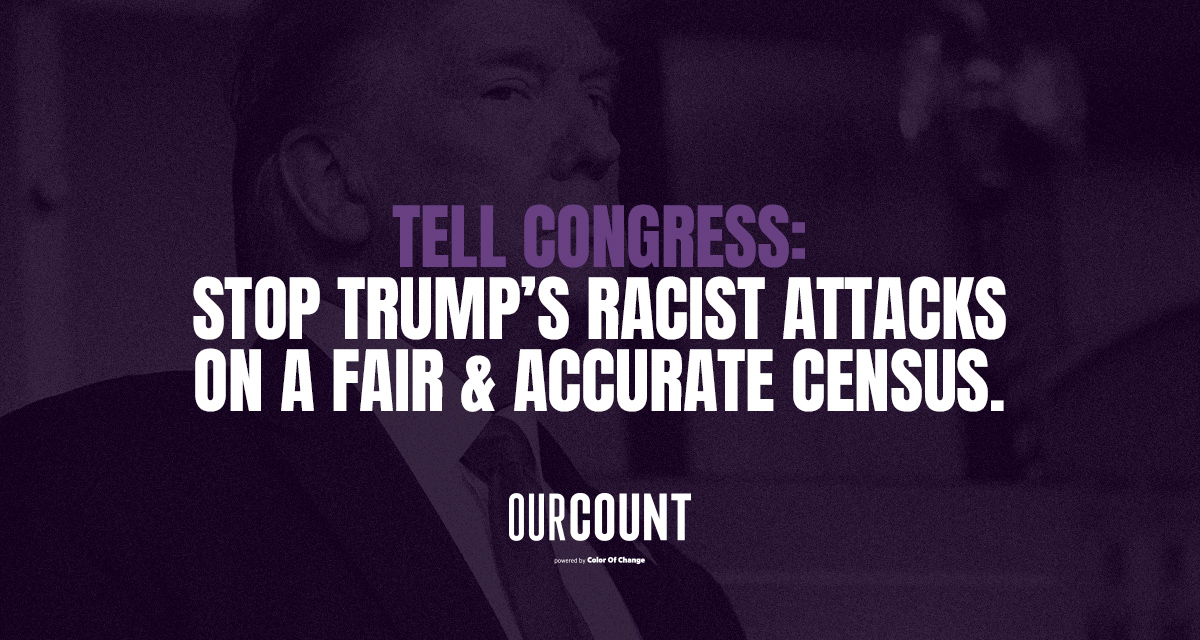 We have everything we need to provide a decent quality of life for Black communities and everyone else in our society. Still, Black folks are suffering and dying needlessly because public officials have given the resources and representation we need to thrive to more privileged communities. This is what happens when we are undercounted, underfunded, and underrepresented in our government.

Yet while most of America is trying to undo the damage of generations of injustice and inequality, Trump is trying to make the problem worse by attempting to sabotage the 2020 Census. Political operatives installed by Trump are trying to shut down self-response and non-response follow up operations a month too soon, which would leave millions of Black and Brown people uncounted, unseen, and uncared for by our government for the next decade.

Rep. Carolyn Maloney just introduced the Fair and Accurate Census Act to stop the Trump administration's most harmful attacks on the 2020 Census. The bill would maintain the expanded schedule that expert statisticians and other career Census Bureau staff designed in order to ensure all communities are fully and fairly counted despite the COVID-19 pandemic. It would also empower Census Bureau staff to prioritize their actual mission ahead of Donald Trump's racist political agenda. Tell your members of Congress to protect Black communities by passing the Fair and Accurate Census Act.

I’m writing to urge you pass the Fair and Accurate Census Act which extends the 2020 Census data reporting deadline and protects self-response and non-response follow up operations. The White House is pressuring the Census Bureau to shorten the self-response and non-response follow up period of the Census, which would cut off much-needed and deserved resources and representation from many communities of color. This would not only harm our country’s most undercounted, underrepresented and underfunded communities, it would further exacerbate the unnecessary suffering and conflict that has spawned uprisings all over America.

Not only does the Fair and Accurate Census Act extend the 2020 Census reporting deadline, it also mandates a robust self-response and non-response follow up period so the Bureau has the time needed to conduct a full, accurate count. Trump’s attacks on the 2020 Census will devastate our country for the next ten years unless you act now. Please do the right thing and ensure a trustworthy 2020 Census count by passing the Fair and Accurate Census Act as written. Thank you.