Tell companies to pause ads on Facebook during July | ColorOfChange.org 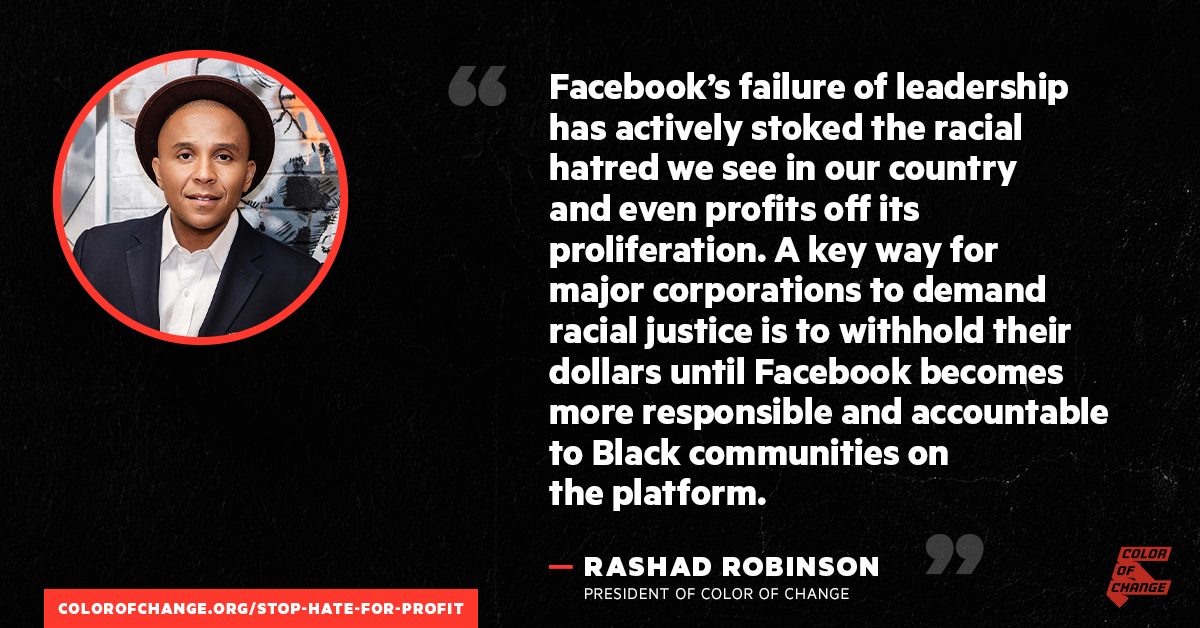 Facebook’s leadership has gotten away with racist practices and inaction because corporations continue to feed ad dollars — nearly $70 billion — into the company’s coffers. But that’s about to change. We’ve already organized nearly 100 companies to refuse to buy ads on Facebook for the month of July. Since yesterday, Verizon and Unilever, who spend millions of dollars each month on Facebook ads, joined our campaign, which is likely to spur a wave of additional corporate supporters. Together we’re going to show Facebook that if they won’t combat racism on their platform, we’re going to come for their profits.

Our requests to Facebook are simple; we need them to: invest in a civil rights infrastructure; start prioritizing the safety of Black users; and, prioritize the sanctity of our democracy. Making these changes will help with years-long problems Facebook has not seriously addressed, like the harassment and censorship of Black women on the platform, and the proliferation of voter suppression. But because Facebook hasn’t made these changes, we have to hold them accountable through means they understand best: their money.

Join us in holding Facebook accountable by asking companies to #StopHateforProfit and pause advertisements on Facebook during the month of July.

Our requests to you have been simple. We've asked you to invest in a civil rights infrastructure, start prioritizing the safety of Black users, and prioritize the sanctity of our democracy.

But after years of Black users and civil rights groups asking you to take these steps, you haven't implemented these changes. It's time for the years-long problems that occur on Facebook, like the harassment and censorship of Black women on the platform, to end.

Until you take the necessary actions to stop the spread of hate, racism, misinformation, and voter suppression on your platform, we will continue to demand that the corporate companies who make up your $70 billion per year revenue stop advertising with you.