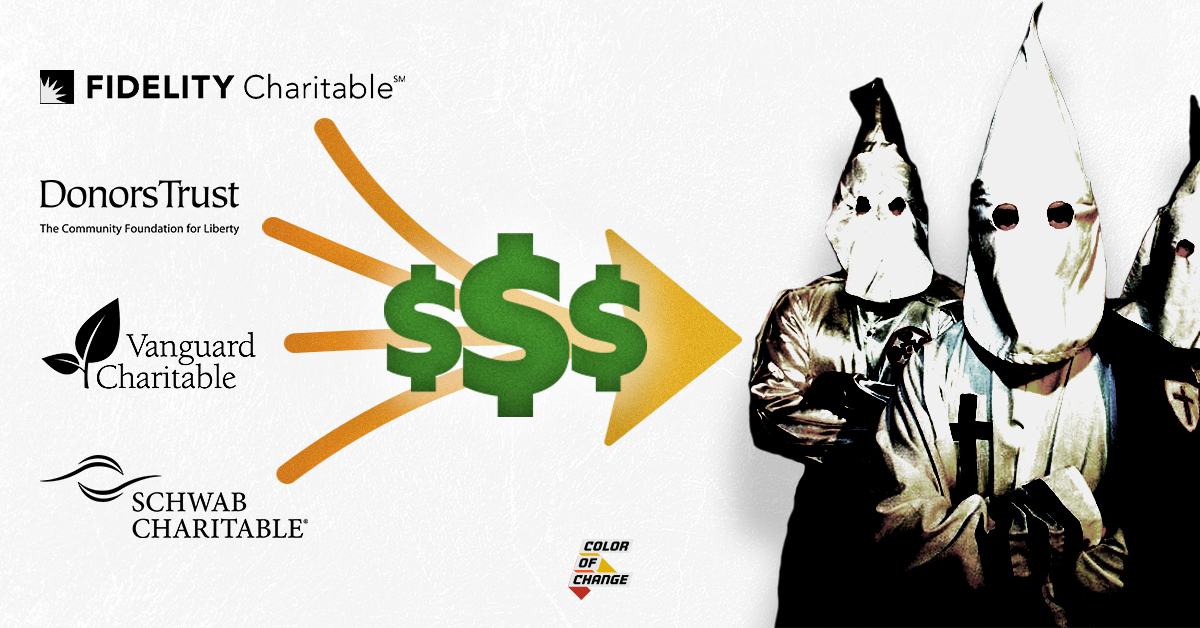 Four of the most high-profile charities in our country - Schwab Charitable, Fidelity Charitable, Vanguard Charitable, and Donors Trust - allow millions of dollars to flow to hate groups through their donor-advised funds ("DAFs"). A report released earlier this year shows that between 2014 and 2017 alone, nearly $11 million was contributed to 34 hate organizations through DAFs.

Many of the white supremacist and anti-immigrant hate groups receiving these funds push the same dehumanizing message the El Paso shooter included in his manifesto. The contributions received by hate groups enable their violence both online and offline. THIS FUNDING OF BIGOTRY MUST END.

While these four charities have failed to act, other donor-advised funds, like Amalgamated Foundation, are joining with Color of Change to fight the flow of money to white nationalist hate groups. Amalgamated Foundation adopted key anti-hate policies from our "Change the Terms, Reducing Hate Online" initiative. The foundation has organized more than 70 donor networks, foundations, and DAF providers that collectively represent over $1 billion in assets to exercise their legal discretion over grants recommended by their donors and adopt proactive policies to ensure that funds do not flow to organizations that promote hatred.

We cannot wait for yet another white nationalist terror attack to hold these charities accountable.

The donations that flow to hate groups through your donor-advised funds enable violence both online and offline. Violent demonstrations, propaganda, and attacks like the El Paso mass shooting demonstrate the bigotry that is, in large part, enabled by easy access to financial resources.

We cannot wait for the next white nationalist terror attack to hold hate groups accountable. You have a responsibility to ensure that the funds you manage do not go to help hate groups. You must adopt the key anti-hate policies from our “Change the Terms, Reducing Hate Online" framework, and stop the flow of funding to hate groups through your donor-advised funds.