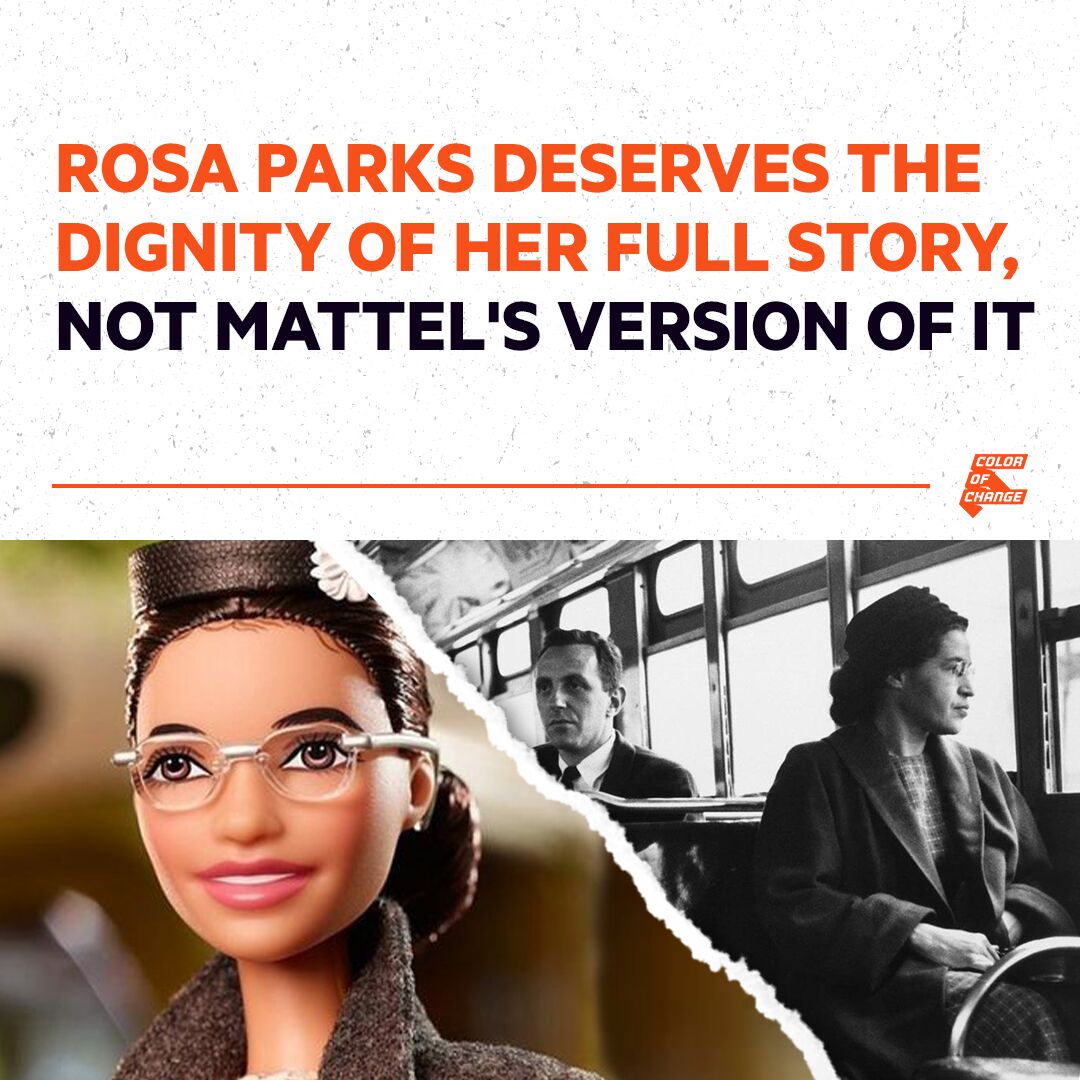 Earlier this week, Mattel released a Barbie doll in honor of Mrs. Rosa Parks. And at first glance, the doll looks great. But, in reality, Mattel got Rosa Parks’ story wrong, and we think they should fix it.

Mattel reduced Rosa Parks’ decades of activism into a single moment, saying she “led an ordinary life as a seamstress” until an “extraordinary moment on December 1, 1955.” But Rosa Parks was far from ordinary. She was a leader in her community and a life-long fighter for the rights of her people, and we cannot allow Mattel to whitewash her story.

Far too often, Black women’s stories are revised or minimized for the white gaze. Much like the work of Mrs. Parks, our work is reduced to one moment, something “extraordinary, ” or a stroke of luck. In reality, Black women have worked tirelessly throughout history in order to make the world a better place for all of the people who live in it. Our activism is not luck. Our successes are not out of the ordinary. They are the result of perseverance, resilience, and hard work. This kind of whitewashing of history diminishes Black people’s pivotal role in this country’s story as organizers, agents of social change, cultural contributors and powerful intellectuals. In a time when white supremacy dominates the culture of this country, this kind of erasure is not just wrong, it’s dangerous.

We must honor Mrs. Parks by telling her full story. Join us in telling Mattel they must correct the story and accessories they’re providing with their Rosa Parks doll.

With the release of your Rosa Parks Barbie, you have not done justice to Mrs. Parks' full story. The version of Mrs. Park story that you have posted with the doll reduces Rosa Parks decades of activism into a single, "extraordinary moment." But that is not the case. Mrs. Parks spent decades fighting for the rights of women and Black people. She was a leader in her community and she helped make the Civil Rights Movement what it was.

It is crucial that you adjust the language and accessories that accompany your Rosa Parks Barbie. Dolls have power, and Barbie dolls are no exception. They can represent culture and help a child understand their racial identity. They also help children begin to understand themselves, understand their creativity and self-expression, and dream up goals and career paths. So when a Black doll does not have a full, multidimensional story, it means the children who play with it lose a powerful opportunity to imagine themselves accomplishing their greatest dreams. That is why Rosa Parks’ story cannot be minimized. Without including Rosa Parks’ full story, her Barbie sends a limited to message to Black children that their own stories — their history — are not worth being told.