Refuse To Help Trump and Kobach's Commission Attack our Freedom to Vote! | ColorOfChange.org 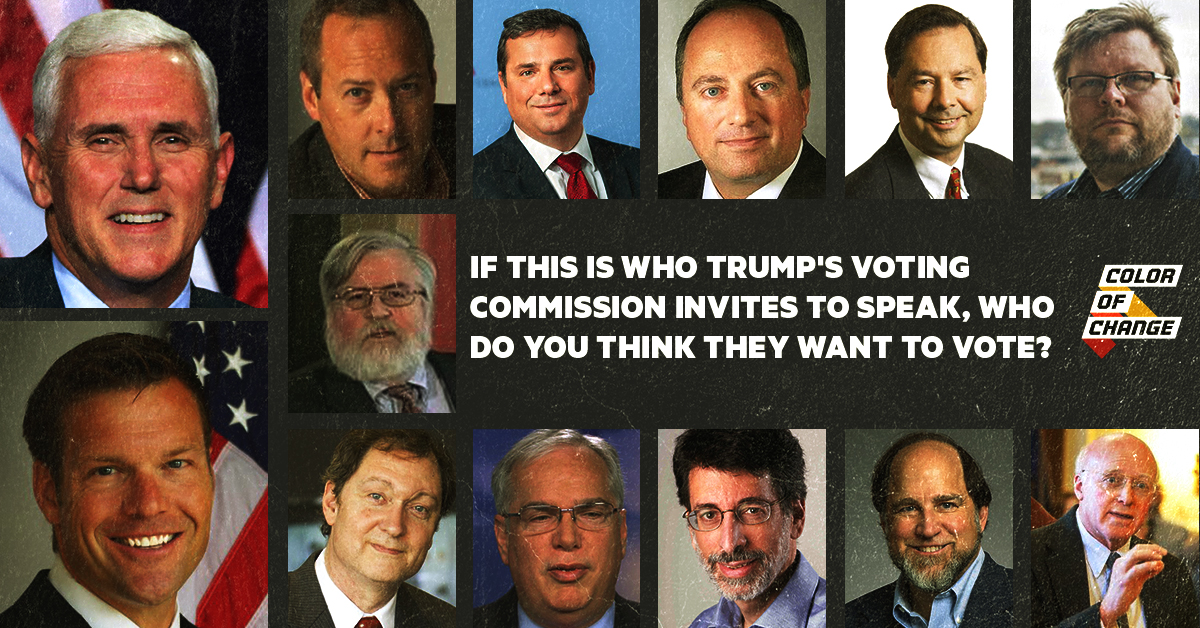 UPDATE (9/12/2017)-The Pence-Kobach Commission is meeting today in New Hampshire. Kobach has lined up a panel of 12 white men several of whom will make specious claims about voter impersonation and fraud. This panel is a sham designed to build the case to erect further barriers to voting and advance Donald Trump's white nationalist agenda by making it more difficult for people who oppose him to exercise their fundamental freedom to vote. Join your fellow Color Of Change members in demanding that your state elections officials refuse to comply with Kris Kobach's request for voter data.

Kris Kobach has demanded the voting rolls from every Secretary of State or Chief Election Official in the nation as a part of his role on Trump's sham Presidential Advisory Commission on Voter Integrity. This commission has been designed to attack our freedom to vote and this request is a clear pretext to nationalize Kobach's Interstate Voter Crosscheck program which has been repeatedly used in voter purges targeting Black voters. Elections officials from fourty-four states have refused already refused to legitimize this commission by declining to comply with Kobach's order.

When announcing that California will not be participating Secretary Padilla stated, ″I will not provide sensitive voter information to a commission that has already inaccurately passed judgment that millions of Californians voted illegally."

Governor Terry McAuliffe said, "At best this commission was set up as a pretext to validate Donald Trump’s alternative election facts, and at worst is a tool to commit large-scale voter suppression."

Kentucky Secretary of State Alison Lundergan Grimes said, "Indeed, despite bipartisan objections and a lack of authority, the President has repeatedly spread the lie that three to five million illegal votes were cast in the last election."

While the consensus from members of the House, Senate, and our intelligence community is that Russia did everything they could to interfere in the election, including hacking the voting systems of several states, Trump and the Kobach commission have decided to ignore that. Instead of working to secure our election systems from credible threats, Trump and Kobach want every state in the nation to send their information to them. Nothing about Donald Trump's tenure give us any confidence he would be responsible with the personal information of every American. Instead of staffing his commission with experts in security and voting freedom it is staffed by Vice President Mike Pence, Kansas Secretary of State Kris Kobach, former Ohio Secretary of State Ken Blackwell, and Indiana Secretary of State Connie Lawson. All of these members have a documented history of suppressing the voting freedom of the Black community. There is no reason to believe this commission will take proper care of this data nor do they have intention of doing anything other than using it as a weapon against Black communities and other progressive voters to further rig elections and maintain Trump's power.

From the time Trump began running for office he has targeted the Black community and our freedom to vote! Candidate Trump urged volunteers to go to inner-cities to "monitor" polls he has previously stated as "rigged" in Philadelphia. After losing the popular vote Trump then asserted that "millions" of people voted illegally without any proof. Under the cloud of this announcement, they even added the worst vote suppressor of the bunch, Hans Von Spakowsky, who as a member of the True the Vote board has a long history of racially inflammatory statements and has advised multiple states on how to implement voter caging operations aimed at removing Black voters from the rolls.

Kris Kobach's Crosscheck system has been used in multiple states to illegitimately and illegally take Black people off of their voting rolls. He's was recently fined in a federal court for attempting to keep documents secret concerning Trump's commission and their current plans to target our Black communities. This is not a man who should be handed the personal information of every voting American. We can not allow Kris Kobach and Donald Trump to cow our Secretaries of State into violating the privacy of everyone who participated in the recent election but also legitimizing a commission thrown together to justify the lies of the current occupant of the White House!

Do not comply with Trump's sham Presidential Advisory Commission on Voter Integrity and hand Kris Kobach the personal information of every voter in your state. This commission has been created to justify Trump's bogus and unfounded claim that there were millions of fraudulent voters in the national election popular vote.

As Donald Trump and Kris Kobach are acting to undermine the important work you do as the Secretary of State or Chief Election Official in administering your state's election, they have completely ignored the consensus of the intelligence community and Congress that Russia worked to undermine and influence our election and will do so again. Kobach himself was fined this week for misleading the court in his own state and failing to disclose vital information to Kansas voters. These men are not to be trusted with the private information of millions of voters in your state.

Tell Donald Trump and Kris Kobach that instead of using our tax money to invade the privacy of the voting booth and threaten the voting freedom of the communities in your state he should instead focus on working to prevent future Russian attacks on our democracy and ensuring the freedom to vote for everyone. Refuse to comply with Kris Kobach's order to disclose the personal information of every voter in your state!