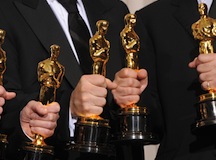 Ava DuVernay's incredible "Selma" was shut out of every category except two at this year's Oscars: Best Original Song and Best Picture.

It's hardly surprising; the Academy of Motion Picture Arts and Sciences (AMPAS) is infamous for marginalizing Black art, largely because their membership is overwhelmingly white. Over the course of nearly a century’s worth of Hollywood films, 88-99% of all Academy Awards winners have been white.

This is the letter we'll send to Academy President, Cheryl Boone Isaacs and the AMPAS on your behalf. Feel free to add a personal comment in the space provided.

The 2015 Academy Awards will reportedly be the "whitest Oscars since 1998;" no people of color received acting nominations. Ava DuVernay's powerful "Selma" was shut out of every category except two: Best Original Song and Best Picture. This is hardly surprising, considering the lack of diversity within your organization's ranks.

These awards matter. Taking home an Oscar results in increased financial and creative opportunities for artists and those they employ. The public snubbing and smearing of Selma is an embarrassment to the Academy. And it is more than a snub — it's a signal that Black films must be tailored to the perspectives and experiences of whites in order to be deserving of recognition by your organization.

It is time for powerful cultural institutions like the Academy -- and all other entities that fund a culture that devalues Black art -- to recognize the message they’re sending to young people about the worthiness of their stories and images, and take substantive steps towards leveling the playing field in the entertainment industry.

The first step towards real progress for the AMPAS is the disclosure of its diversity numbers. We demand you do so immediately.