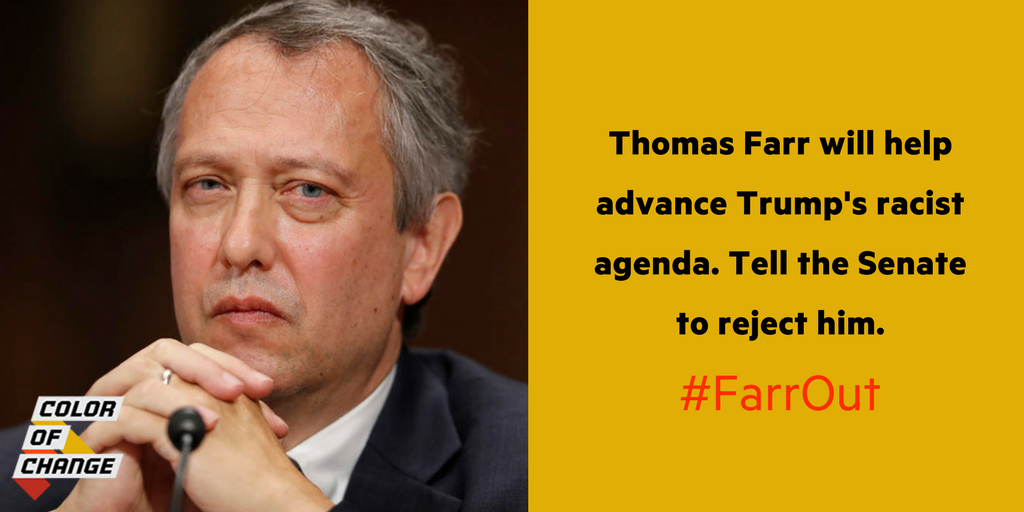 Farr already has the backing of both North Carolina Senators, so we're asking the Senate to protect the voters of our state and the whole nation.

Farr has been North Carolina’s chief defender of voting laws that a federal court said “target African Americans with almost surgical precision.” His nomination to the longest judicial vacancy in the nation comes at the expense of two highly-qualified African-American female judges who were blocked from receiving a Committee hearing. Farr’s history of mistreatment of North Carolina’s African-American voters makes him ill-suited to preside over a region with a sizeable Black population.

Farr's nomination fits into a larger pattern that sees placing ultra-conservative federal judges on the bench as one of the few areas that the Trump Administration is productive. We must work to make sure that the rights of Black voters are protected by the judiciary and placing Thomas Farr would be a decidedly great setback for democracy in North Carolina.

President Trump is rewarding Thomas A. Farr, North Carolina’s chief defender of voter suppression, with a plum federal judgeship. The U.S. Senate will vote on his nomination very soon.

As a voter, I am asking you to oppose Thomas Farr's nomination to become a federal judge. Farr is famous for defending GOP mailers aimed at intimidating Black voters during Jesse Helms’ 1992 campaign. He is now the chief attorney for the NC Republican’s effort to disenfranchise voters of color, students, and the poor. Farr’s nomination is especially insulting because it’s for the long-vacant seat on the Eastern NC District Court that was denied to two highly-qualified African-American female nominees who Sen. Burr blocked from receiving a hearing.

Please do what the Administration will not — oppose Thomas Farr’s nomination as a federal judge and protect North Carolina voters.