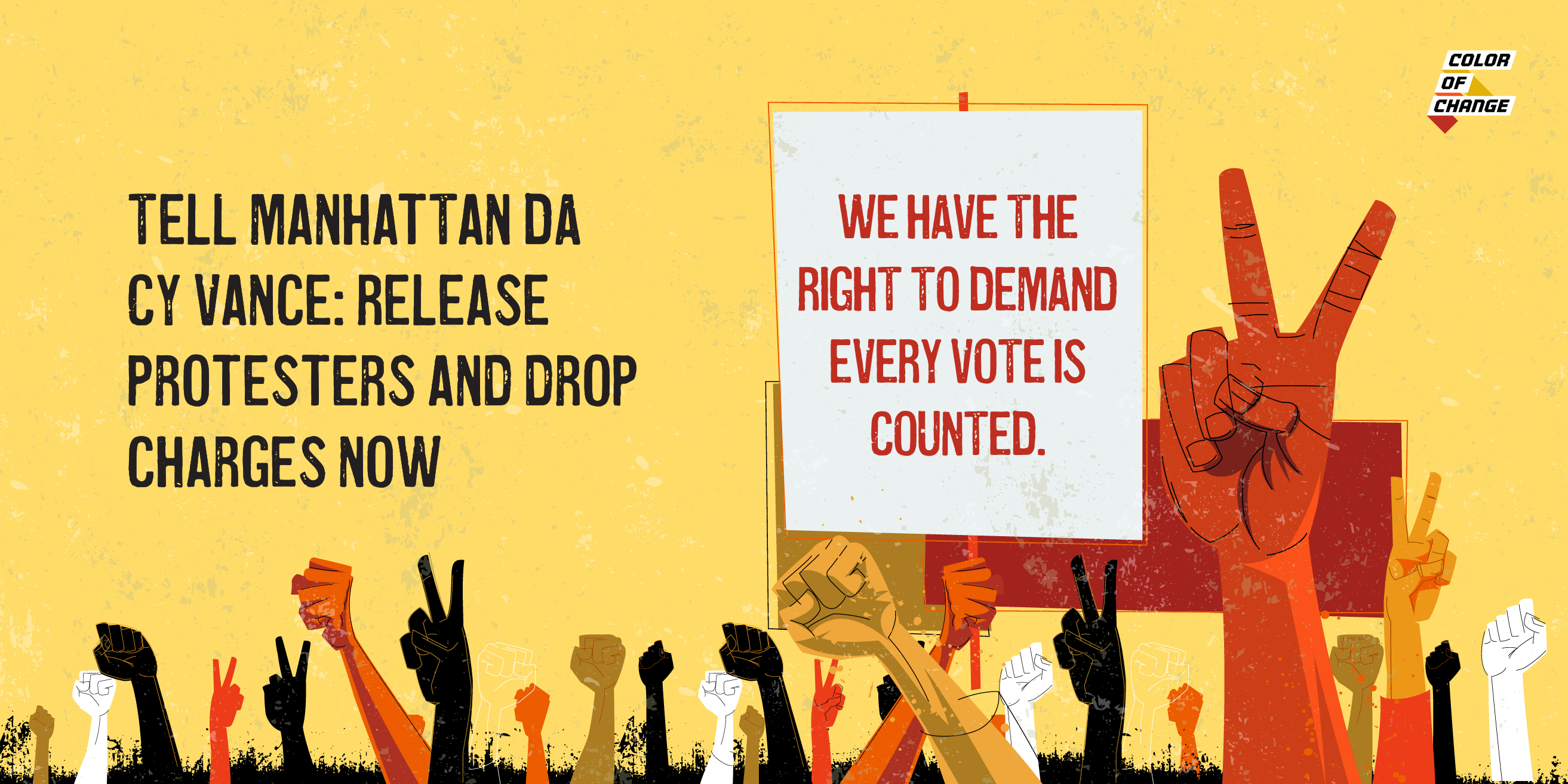 On Wednesday, November 4, mass arrests were made in New York City as people demonstrated to demand that every vote be counted in this election. Manhattan District Attorney Cy Vance must release and immediately drop all charges against protesters.

We have a right to protest. Period.

Even as white supremacists, emboldened by Trump's rhetoric, continue to threaten voters with violence, protesters are taking it to the streets to demand a free and fair election — and that every vote is counted.

This year, we've seen escalated violence against activists demanding justice for Black people murdered by the police. Protesters were met with violent force, handcuffs, and locked in cages — and thousands of them are still facing criminal charges months later. And now, after the election, it's happening again.

While the U.S. democracy is at stake, brave New Yorkers took to the streets to say "Count Every Vote." NYPD responded with violence.

Using a police tactic called "kettling," police officers surrounded protesters on all sides so that they had no way to escape, then charged into the crowd to make arrests. Dozens of protesters were arrested, thrown to the ground, and terrorized by police officers in the West Village. Videos of police attacking and beating protesters have been circulating on social media.

No one has fought harder than Black people to make sure that everyone in this country can vote. Black people put their bodies on the line for freedom — all the time. Now is no different.

We won't let violent police officers silence us. We must continue to defend this election, to demand that every vote is counted, and to protect the protestors who are on the front lines of this historic fight. We will decide who will be our next president, and we the people will insist we count every vote.

Protesting is our fundamental right and it should be respected. So is voting, and we must count every vote. Our communities should not be punished for fighting for justice and demanding a fair election.

Protests have always moved America forward. Elected leaders need to listen to those they work for and make sure all votes are counted. Add your name to demand NYC District Attorney Cy Vance release the protesters immediately and drop all charges NOW.

While the U.S democracy is at stake, brave New Yorkers took to the streets to demonstrate and to demand that every ballot cast is counted. However, they were met with police violence. A phalanx of NYPD officers moved in on a group of several hundred protesters in the West Village. And what happened next was reprehensible.

Using a police tactic called "kettling," police officers approached protesters from behind while also racing past protesters to block them at the next cross street. The police encircled protesters so that they have no way to escape, then charged into the crowd to make arrests. Ultimately, many protesters were thrown to the ground and arrested.

Several videos show police officers attacking and beating protesters. None of the actions on behalf of the NYPD were acceptable. As Manhattan District Attorney, you have a major role at this moment. You must ensure that everyone’s right to protest is protected and that no protesters are charged for demanding free and fair elections.

Immediately release all protesters who were arrested on Wednesday, November 4, and drop all of their charges.