Trump and the NY Post are using lies and fearmongering to stop bail reform. We won't let it happen.

Trump and the NY Post are using lies and fearmongering to stop bail reform. We won't let it happen. 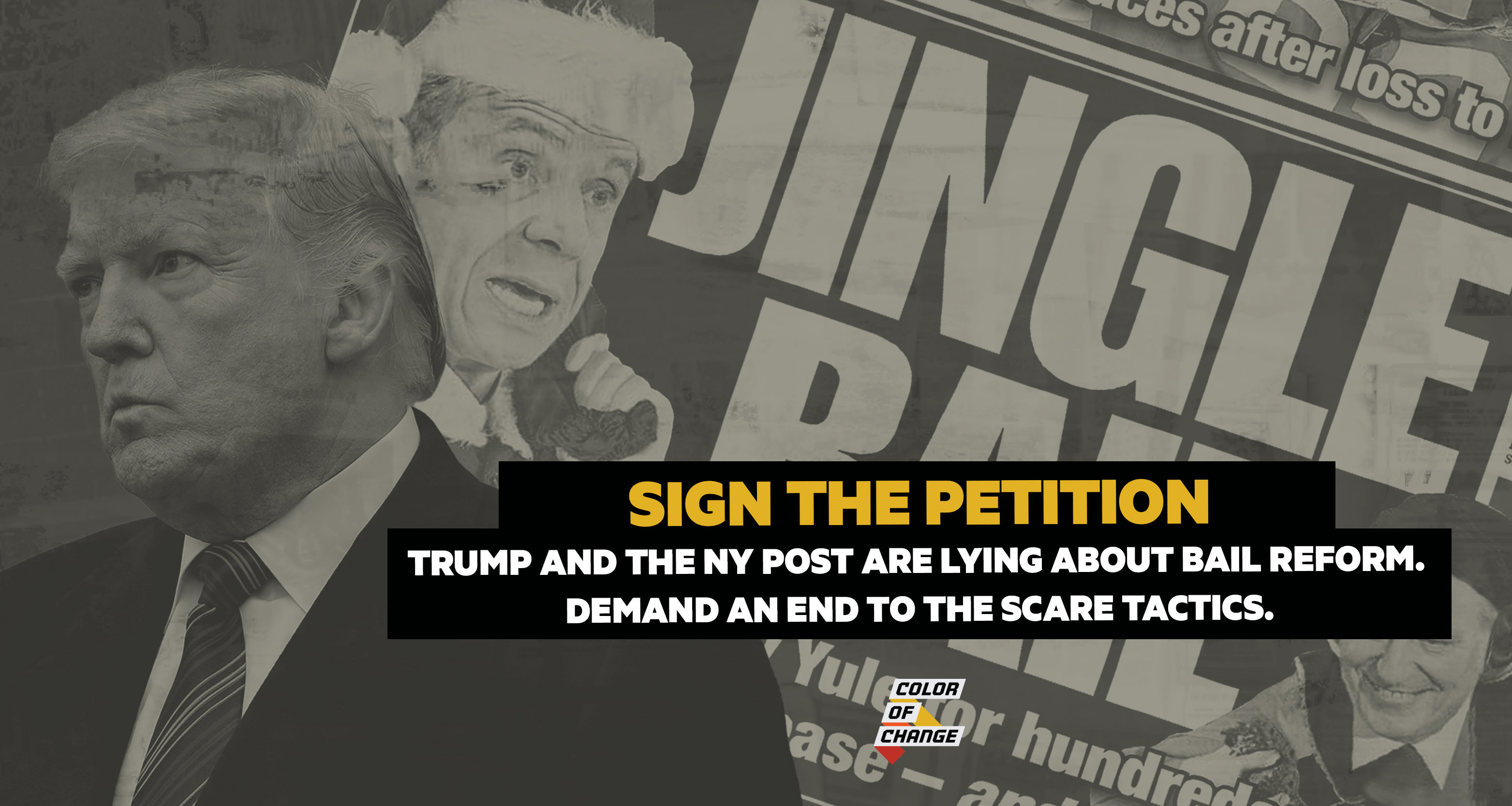 Earlier this year, New York state made history and took a huge step towards ending mass incarceration, and now racists everywhere from law enforcement, the media, and even Trump are trying to smear these wins and incite fear before they've even gone into effect.

Communities worked hard to pass historic legislation that overhauled New York's broken jail system by instituting bail reform that means thousands of people who have not been convicted of a crime will no longer suffer in jail simply because they can't afford bail. The law doesn't go into effect until January, but local officials are preparing to release people who are in stuck in jail because they couldn't pay bail early so there isn't too much of a backlog in January. It only makes sense. But then the New York Post wrote multiple inflammatory articles claiming 900 criminals would be released onto the street and spread lies that New York City Mayor Bill De Blasio would be giving people Mets tickets and gift cards as a "reward." The city hasn't even determined what their supervised release program will need to look like for people released under the new law yet. And it's not even confirmed that Mets tickets are a part of the plan. For the past four years, NYC's supervised release program has helped people meet their needs in order to make it back to court. They get $10 gift cards to put food on the table, cellphones so they can get court reminders, and metrocards so they can show up to court. These are basic necessities that help families who couldn’t afford bail navigate the justice system and stay together.

Releasing people pre-trial is working better than jail, which is costing taxpayers ALOT more without improving public safety. In fact, extensive research--and real-life examples from across New York State show that LESS reliance on incarceration actually delivers MORE public safety. In New York City, the jail population has dropped from 22,000 to 7,000 over the past three decades and crime is lower than ever before. How? Legislators, advocates and stakeholders focused on keeping people out of jail, and investing more in community-based resources such as housing, treatment, services and care. The result? Less incarceration and more public safety.

Trump and the NY Post are lying to scare people into thinking releasing people from jail is dangerous. But we know the real danger is inside of cages. Kalief Browder nearly died on Rikers Island and later committed suicide because of the trauma he faced there.

Despite these racist scare tactics, we aren't scared. And we can't be silent. The stakes are really high in New York. Lawmakers are already working against the new bail law to roll it back--and the country is watching. If we all stand up and demand the New York Post corrects their articles and tells the truth, we can put an end to this smear campaign against justice. Will you sign the petition?

This is the message that will be sent to Sean Giancola, Publisher and CEO of New York Post:

In the spirit of principled journalism, we're calling for you to exercise integrity in your reporting on criminal justice reform. Stop spreading false and unsubstantiated information to incite irrational fear in communities.