Not fit for Congress: Expel the coup supporters now | ColorOfChange.org 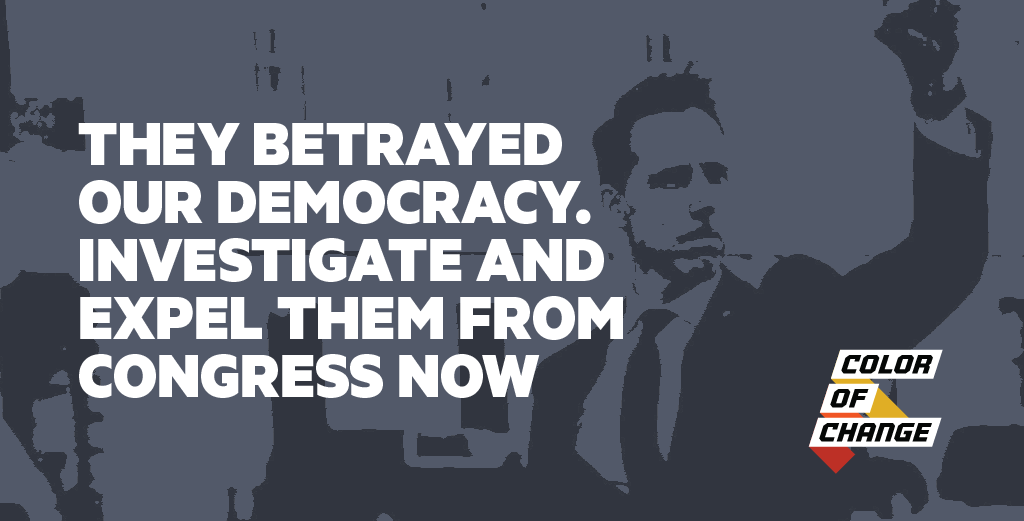 On January 6, just hours after news of a Democratic flip in Georgia, and in an attempt to halt Congress’s certification of president-elect Biden, armed Trump supporters rioted and stormed the U.S. Capitol building. Make no mistake: Representative Ted Cruz’s leading role in blocking president-elect Biden’s certification empowered these extremists. Representative Josh Hawley’s raised “power fist” to Trump supporters outside of the Capitol building empowered these extremists. Representative Mary Miller’s invocation of Adolph Hitler in her speech on the Capitol lawn empowered these extremists. This was not just a coup attempt. It was a clear message from a white nationalist base that is not going anywhere any time soon, and that has been enabled by sitting members of Congress. That's why we're asking you to support Rep. Cori Bush's new bill to investigate and expel any member of Congress who has supported Trump's dangerous coup attempts.

We demand that you support Rep. Cori Bush’s resolution to investigate and remove the members of Congress who have enabled Trump's dangerous attempts to overturn a legitimate election. Every single Representative who has fanned the flames on baseless conspiracy theories about election fraud, every member of Congress who has worked to invalidate the votes of their Black constituents, every member of Congress who has launched frivolous lawsuits in an attempt to overturn the election, has not only actively put Black people’s lives in danger, but has betrayed their oath to uphold this country’s constitution. History tells us that when we ignore an attempt like the one we saw at the Capitol building, and when we do not seek to hold white nationalists to account, it only encourages that base to organize larger, more effective attacks in the future. The members of Congress who have tried to undermine the election are responsible for enabling this attempted coup and they must be investigated and removed from office.