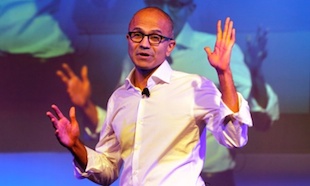 Black women earn 64 cents to the white man's dollar, and Microsoft CEO said that women should rely on "karma" instead of asking for a raise at their job. BIG MISTAKE, for which he almost immediately apologized. The thing is: an apology is not enough. We need actions not words to ensure that CEO Satya Nadella's slip up was just that, and not a pervasive mentality which runs throughout the company, keeping women from asking for and receiving raises.

Join our campaign demanding that Microsoft be transparent with its pay data, and release it to the public. If Black men and women are ever going to have a fair shot at Microsoft, or anywhere in the tech industry, big companies need to make their salary statistics public. We need to know how much Black folks are earning compared to their white counterparts.

Here's the letter we'll send to Microsoft executives on your behalf. You can add a personal comment using the box provided.

I am writing to demand that you immediately release additional data on the diversity of Microsoft’s workforce.

Satya Nadella apologized for his comments that women should trust in karma to close the pay gap instead of asking for a raise, but an apology is not enough. Concrete action is needed.

Disclosure is the first step to fixing the massive gender and racial pay gap in the tech industry. Women make 78 cents to a man’s dollar, while Black women and men make disproportionately less - 64 cents and 73 cents for every dollar a white man makes, respectively.

Microsoft is one of the tech industry’s leaders and has a long-standing commitment to diversify its workforce, but Black people still represent only 3.5% of the company - that’s four times fewer Black people than the American population. If Nadella’s apology and Microsoft’s commitment to inclusion are sincere, Microsoft needs to take the first step and disclose data on the pay gap for Black women and men at Microsoft.