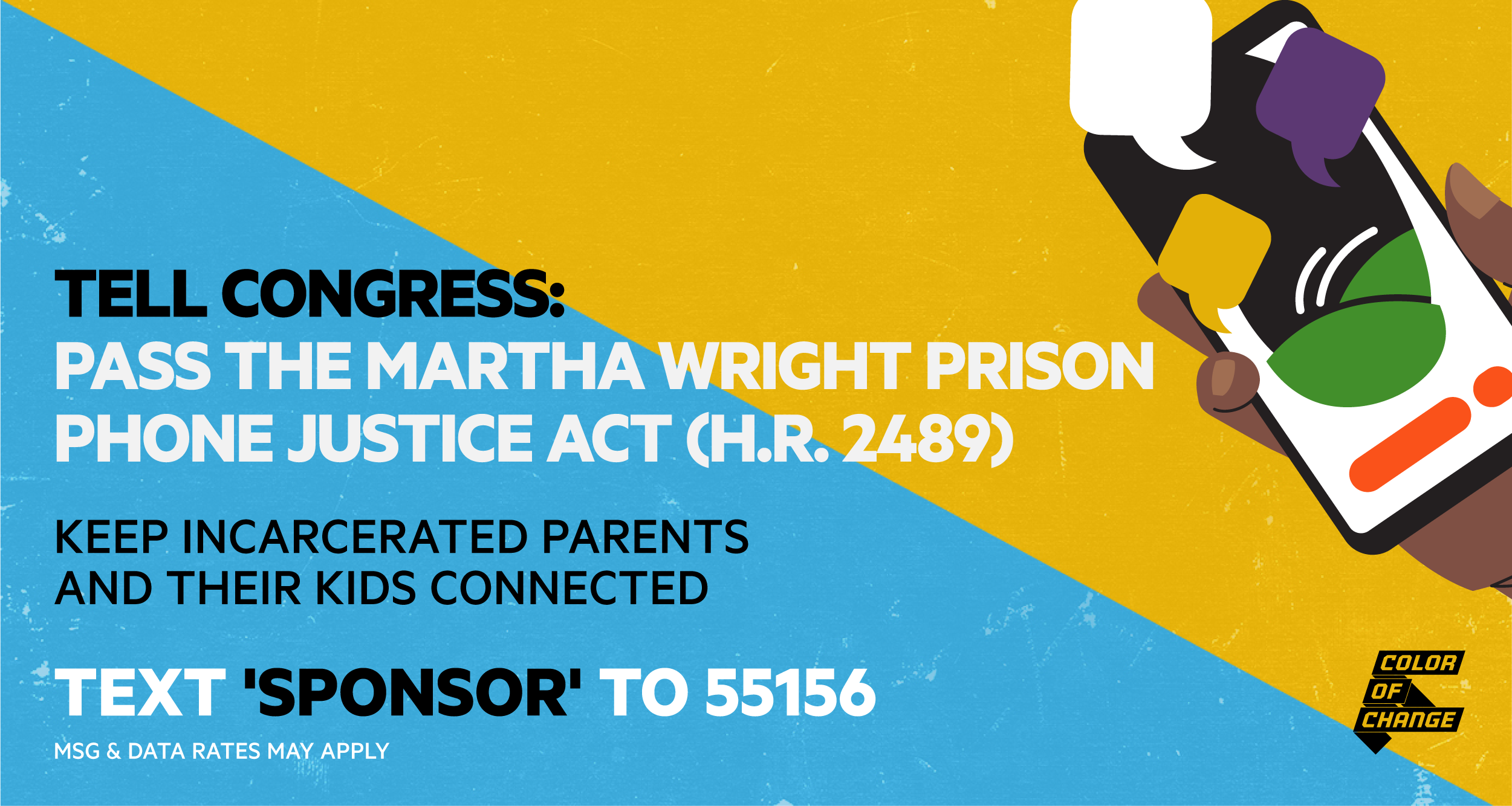 As of June 14, the Martha Wright Prison Phone Justice Act has 30 co-sponsors in the House of Representatives.

Getting that many co-sponsors demonstrates that more House members are aware of the need to regulate the prison and jail telecom industry and to keep families connected. We must keep the pressure going to make sure that this bill has as many co-sponsors as possible so it gets out of the House Energy and Commerce Committee and on to the floor of the House for a vote.

In March, the Senate Commerce, Science, and Transportation Committee moved the Martha Wright-Reed Just and Reasonable Communications Act of 2021 out of committee after a markup.

The Martha Wright-Reed Just and Reasonable Communications Act would allow the FCC to address the predatory prices that incarcerated people and their loved ones have had to pay to communicate with each other. The legislation clarifies the FCC’s authority to regulate all prison and jail calls. In 2017, a federal court limited the agency’s authority over intrastate calls and held that the agency could regulate only interstate calls.

Getting this bill out of committee is an important step for this vital legislation to get a vote on the Senate floor.

Incarcerated people and their loved ones deserve to stay connected. Period.

While tens of millions are getting vaccinated and re-connecting with loved ones after spending so much time apart, incarcerated people around the country are still unable to see family and friends because of in-person visitation restrictions.

Another common way for families to regularly stay in touch with their incarcerated loved ones is via phone and video calls, but prison telecom corporations like Securus (owned by Aventiv Technologies) and ViaPath Technologies (formerly GTL) charge families as much as $1 per minute.  This creates a huge financial burden on families, during normal times, but the impact has been exacerbated because of the pandemic, making it even tougher for them to stay connected.

Preying on families via hiked up telephone and video calls is a $1.4 billion industry, but this type of exploitation of incarcerated people and their loved ones is not isolated to just the telecom sector. Over 4,000 corporations across industries are raking in billions of dollars each year and their prison-profiteering tactics target and hurt Black and low-income families the most.

These types of ruthless practices cannot continue. One in three families have to go into debt just to talk with their loved ones and that is unconscionable. The financial impact on the families of incarcerated individuals is already too steep without having to deal with price gouging from telecommunications companies. A majority of these families with an incarcerated family member already face financial hardships and having to pay substantially for phone calls makes their situation untenable.

We can stop this. In April 2021, Rep. Bobby Rush sponsored the Martha Wright Prison Phone Justice Act. The act would give the FCC the authority to fight back against predatory practices from prison telecom companies, allowing incarcerated people to connect with their families without causing financial instability. A previous version of this bill passed in the House of Representatives in 2020, yet never made it to the Senate floor. Now is the chance to make it happen — and now more than ever, families and loved ones need to stay connected.

Mrs. Martha Wright-Reed was a champion for phone justice and fought for decades to make prison phone calls affordable for incarcerated people. Let's keep her hope and vision alive by demanding that Congress pass the Martha Wright-Reed Act now!

Tell your representative to do their part to support the Martha Wright Prison Phone Justice Act and co-sponsoring the legislation. Your voice is crucial in the fight to keep families connected.

Below is the letter we’ll be sending to your representative:

As your constituent, I am calling on you to co-sponsor the Martha Wright Prison Phone Justice Act. This bill would restore the FCC’s authority to stop prison phone corporations from charging incarcerated people and their families outlandish rates for voice and video calls. You can lessen the financial burden that's already crushing vulnerable communities.

Connecting families helps people thrive, and incarcerated individuals should be able to speak with their loved ones without causing financial hardships. Co-sponsor the Martha Wright Prison Phone Justice Act today.