The Golden Globes are racist & it's time for them to go. #GlobesGottaGo | ColorOfChange.org

The Golden Globes are racist & it's time for them to go. #GlobesGottaGo

The Golden Globes are racist & it's time for them to go. #GlobesGottaGo 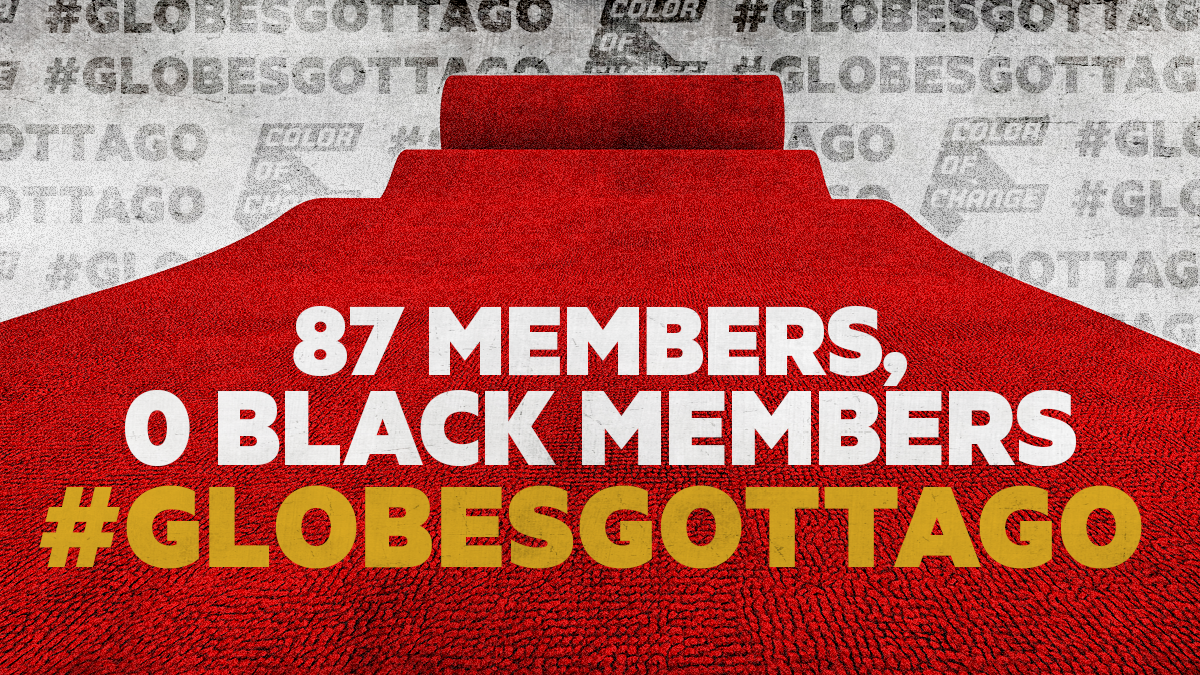 The Golden Globes, and the association who runs the awards show, the Hollywood Foreign Press Association (HFPA), are racist. Over the years, they’ve had countless reports of “institutional racism, sexism, disrespect, alleged corrupt financial dealings, and other unethical practices.” One member of the HFPA called Black Lives Matter a ‘racist hate movement.” Another member recently confused popular Black actor, Daniel Kaluuya, with Leslie Odom, Jr. Between these problems, some members’ “questionable credentials,” and the glaring absence of Black members in the HFPA for more than 20 years, it has become abundantly clear that these Hollywood institutions are unabashedly discriminatory, and they must be stopped.

The Golden Globes' broadcast and primary financial partner, NBCUniversal, must immediately remove all support from the Hollywood Foreign Press Association and Golden Globes.

As a world-renowned organization in the entertainment industry, the Golden Globes and the HFPA must do better, but as long as their core broadcast partner, NBCUniversal, continues to enable their discriminatory and toxic environment, the HFPA will not enact the transformative change needed.

Our partners at TIME’S UP gave the HFPA a clear list of policies and practices they can change to eliminate the racism and discrimination that proliferate at the organization. But the Golden Globes have done nothing, and NBCUniversal is publicly applauding that lack of serious effort. They are happy to sit back and allow racism to fester, creating insidious, toxic, hostile, and exclusionary environments for Black people, environments which are replicated in other industries, and can lead to real-world impacts, like the false belief that Black girls are ‘less innocent’ and ‘less in need of protection’ than white girls of the same age, or that judges give longer sentences to Black people than they do white people.,

In March, TIME’S UP put forward a list of recommendations to help eliminate the “documented and reported” “institutional racism, sexism, disrespect, alleged corrupt financial dealings, and other unethical practices” common within the Hollywood Foreign Press Association (HFPA), and outlined some clear measures that would help to eliminate the organization’s discriminatory policies and practices. But the HFPA has not implemented these measures.

The meager plan approved this week by HFPA’s membership falls far short of what is needed to address the underlying issues that created such a hostile and toxic anti-Black environment. It ensures that the current membership of the HFPA will remain in power and that the next Golden Globes will be decided with the same fundamental problems that have existed for years.

This is not just about one instance of discrimination, one email, or a matter of expelling an HFPA member who has demonstrated racist behavior. It is about eliminating the racist culture that has characterized Hollywood and the entertainment industry since they were established. This cannot be accomplished through the addition of a few new members or through the shifting of a few practices; it requires a full overhaul, a thoughtful and intentional rebuilding from the ground up that includes the input of justice experts. As such, we are calling on NBCUniversal to remove all support from the Hollywood Foreign Press Association and Golden Globes.