Mayor Bill de Blasio and NYPD Commissioner must fire Daniel Pantaleo and ALL officers responsible for the death of Eric Garner! | ColorOfChange.org

Mayor Bill de Blasio and NYPD Commissioner must fire Daniel Pantaleo and ALL officers responsible for the death of Eric Garner!

Mayor Bill de Blasio and NYPD Commissioner must fire Daniel Pantaleo and ALL officers responsible for the death of Eric Garner! 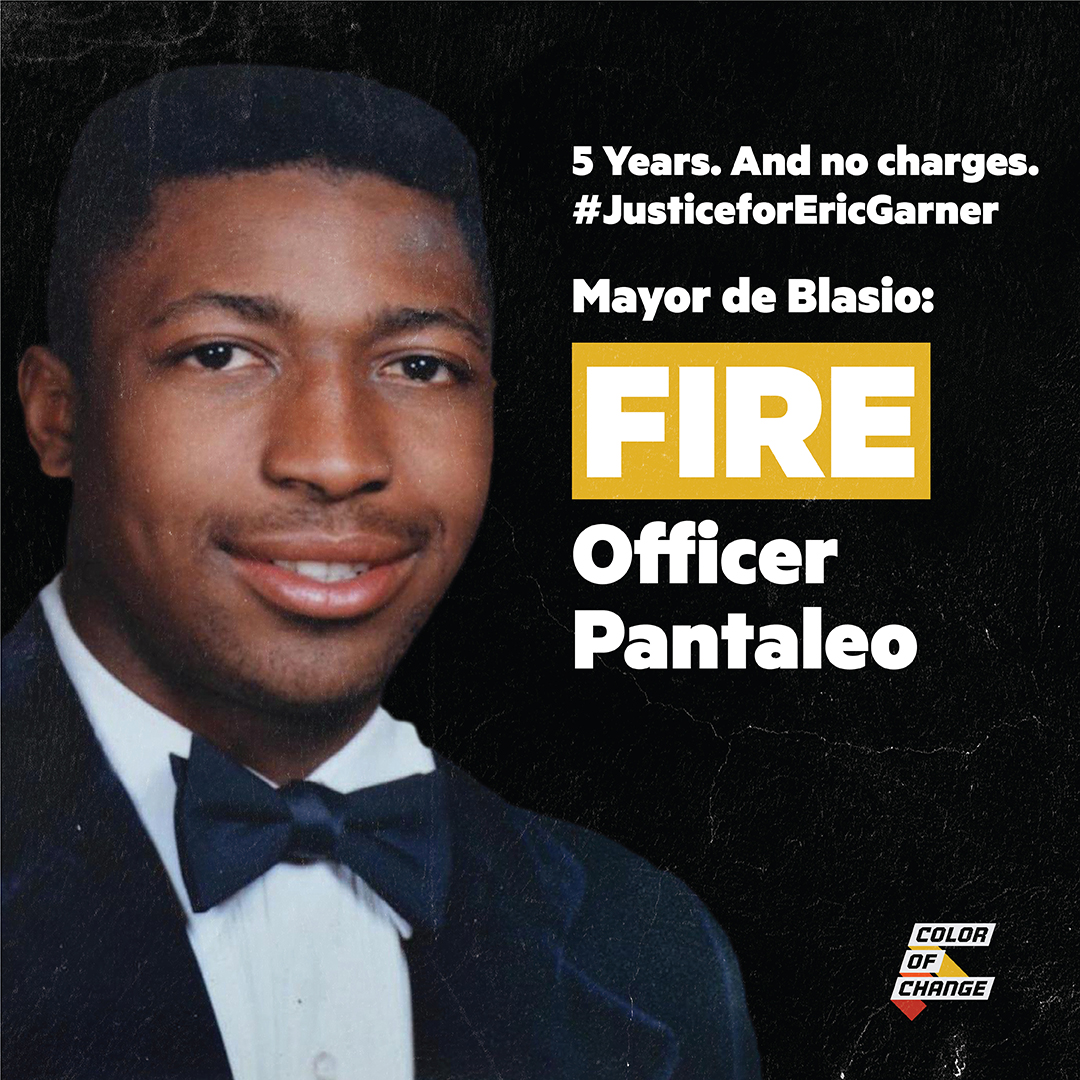 5 years ago Eric Garner pleaded for his life for NYPD officer Daniel Pantaleo to release him from a deadly and illegal chokehold. Officer Pantaleo never let go and eventually murdered Eric Garner all because he was standing on a street corner as he did daily minding his business.

Although Garner’s death was ruled a homicide, officer Pantaleo, and other officers who restrained him, walk free and are still employed by the NYPD, collecting their paychecks and carrying the same badge that gave them permission to murder a Black man in the street. In the 5 years since, Mayor de Blasio has done nothing to hold his department’s officers accountable, not even an investigation. Meanwhile, he is running to become president on promises of police reform and championing for justice when he can’t even hold his city’s officers accountable for the death of Eric Garner.

At the second Democratic presidential debate, protestors rightfully shouted for Mayor de Blasio to hold Eric Garner’s murderer accountable by immediately firing officer Pantaleo. On the stage, de Blasio gave a shaky and weak promise to the Garner family by stating “They’ve gone through extraordinary pain. They are waiting for justice and are going to get justice.” It’s been far too long and de Blasio has had too many opportunities to take action. Enough is enough. He needs to use his power as the head of the NYPD and fire officer Pantaleo for killing Eric Garner. If we can get Mayor Bill de Blasio to fire officer Pantaleo, we can get justice for the Eric Garner family once and for all.

Will you join us in getting justice for the Garner family?

I am calling on you to immediately fire Officer Daniel Pantaleo and ALL officers for killing Eric Garner. Officer Pantaleo abused his power, illegally and forcefully murdered Garner in the street. You have made promises countless of time to champion for justice and police accountability and have failed to do so for the past 5 years.

It is time for you to take action and not just use your words. While Garner’s family has gone through an indescribable amount of pain after the murder, Officer Pantaleo and the other officers have been free to collect their paychecks from the NYPD. This is your opportunity to prove to the American voter that you actually value Black lives and that you are in fact a champion for justice.

You stated at the second presidential debate that the Garner family will soon see justice. The only semblance of justice that you can provide to the family is by immediately firing all of the officers.

Time is up. You must immediately use your power and act now.