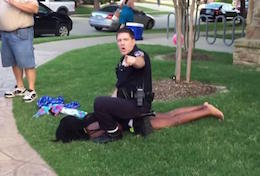 UPDATE 06/09/2015: McKinney Police Officer Eric Casebolt has resigned following widespread public outrage. It's an important step in the right direction, but not enough. Demand he face criminal charges for his action here.

Join us in urging local officials to fire Officer Casebolt and charge him with assault and battery for his brutal and discriminatory actions.

This is the letter we'll send to Mayor Loughmiller and local officials on your behalf. Feel free to add a personal comment in the space provided.

I am writing to urge you to fire Officer Casebolt and file criminal charges of assault and battery against him for his brutal and discriminatory actions against Dajerria Becton and a group of Black teens who attended a pool party at Craig Ranch pool.

No person who treats another human being, let alone children, in such an abusive, life-threatening manner can be a police officer. The Black teens were singled out for abuse and none of the white bystanders experienced any police aggression. It's gravely unjust.