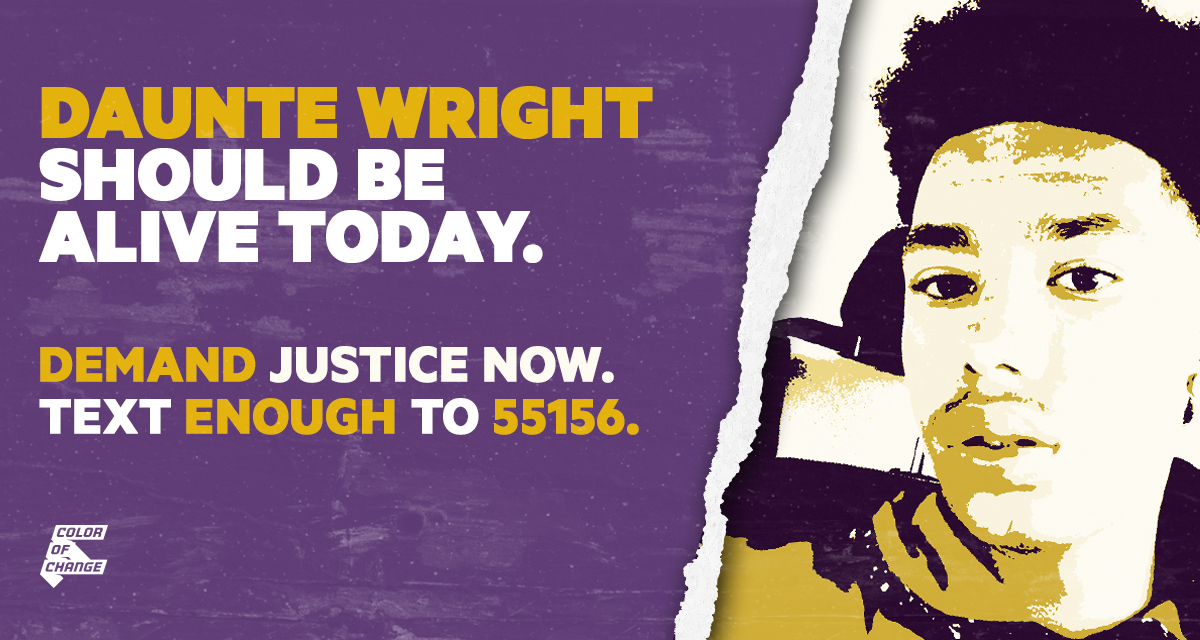 Kim Potter, the police officer who killed Daunte Wright on April 11, will be charged with second-degree manslaughter.

This is important, but it's not the end of the story. Even if Potter is convicted of manslaughter, Daunte Wright's murder is the tragic result of a national crisis that continues to threaten Black lives.

This is about more than one police officer or one police department. Policing is a national public health crisis. And to win justice for Daunte and prevent the next tragedy, we need to be clear about what ‘public safety’ means — and demand investments to make it real for Black people.

The ONLY path forward is structural change that reduces the size, scope, and funds of police departments. Add your name to demand justice for Daunte Wright now.

The Brooklyn Center police officer who killed Daunte Wright has been identified as Kim Potter.

Potter has worked for Brooklyn Center PD for 26 years. As a former police union president, she has counseled other officers involved in deadly shootings — and she’s likely negotiated the discipline policy for officer misconduct.

Make no mistake: Kim Potter murdered Daunte Wright. And she knows how to cover it up because she's helped other cops avoid accountability.

In an attempt to avoid accountability for the murder of Daunte Wright, Officer Potter has submitted a letter of resignation.

Resigning before they can be fired is a common tactic for cops involved in police shootings. That way, they can avoid liability and hold on to their pensions — a caveat often buried in police union contracts.

As we continue the fight to divest from policing and end this war on Black people, we must also make cops who murder Black people and lose their pensions, badges, and police guns.

On Sunday, April 11, police in Minnesota murdered another Black man — less than 10 miles from the site of the Derek Chauvin trial.

Enough is enough. The murder of Daunte Wright is only the most recent, tragic example of a truth we’ve known and will continue repeating: Police don’t keep us safe. Never have, never will.

Amplify our call for justice: The police officers who murdered Daunte Wright must be FIRED immediately. We must fund our communities, divest from policing, and end the war on Black people.

Here’s what we know: Police officers in Brooklyn Center, a Minneapolis suburb, shot and killed Daunte Wright during a traffic stop on Sunday, April 11. Officer Kim Potter — a 26-year veteran of the police force and former police union president — shot a gun into Daunte’s car. His car then hit another vehicle. A passenger in Daunte’s car was injured, and Daunte was pronounced dead at the scene.

Tragically, Daunte’s story is far too common. The majority of people killed by police in America are killed in response to mental health calls, traffic infractions, and other low-level offenses.

The violence didn't end with Daunte Wright's murder. When Brooklyn Center community members raised their voices to mourn and demand accountability, the city responded with more police and more violence, attacking protestors with rubber bullets and chemical weapons. On Sunday night, the National Guard and Minnesota State Patrol were called in to brutalize a grieving community.

It’s true in Brooklyn Center, it’s true in Minneapolis, and it’s true everywhere: When police murder Black people, the State does everything it can to justify and multiply police violence. But when Black people demand justice, the State ignores our demands — then inflicts harm and violence on us.

Let’s be clear: Daunte Wright and George Floyd were murdered by Minnesota police because policing is built on, propped up by, and empowered by white supremacy. This is exactly why a Black-led coalition of activists and organizers launched the "Yes 4 Minneapolis" campaign to replace the violent, racist Minneapolis Police Department with a new Department of Public Safety. The initiative would pave the way for Minneapolis to divest from policing and create real, structural change — investments in housing, public health, violence prevention, and first responders trained to address mental health crises, family disputes, medical emergencies, and other emergencies.

Structural, systemic change is long overdue. Because this isn’t a Minnesota issue, or about “a few bad apples.” Policing is a public health crisis.

Police departments across the country bear rotten fruit because policing in America is rotten to its roots — contaminating everything it touches, threatening Black lives, and waging war on Black, Brown, and Indigenous communities across the nation.

Kim Potter and the officers involved in the murder of Daunte Wright must be fired immediately, and we need all hands on deck to end systemic anti-Black violence. Sign the petition now.

Daunte Wright was 20 years old. He was a father of a two-year-old. He planned to go back to school to get his GED. He worked at a restaurant to support his family.

Daunte was a Black man. He was a human being. And because police in this country can murder with impunity, because police exist to protect property and uphold white supremacy, Daunte’s life was tragically and needlessly cut short.

We already know that policy tweaks, “more training,” and “police reform” won’t keep Black people safe. We already know that the police union, Brooklyn Center Police Officers Association, will do everything possible to vilify Daunte and attempt to justify his murder. Because even in the midst of the Chauvin Trial — as the city mourns the loss of George Floyd, Tyshon Jones, Jamar Clark, Daunte Wright, and so many others — police in the Twin Cities will continue to murder Black people.

Firing the police officers who murdered Daunte Wright is the absolute bare minimum. Add your name now to demand Kim Potter is fired immediately. Then, join the fight to divest from policing and dismantle ALL systems that fuel the war on Black people.

Below is the letter we will send to Mayor Mike Elliott and Brooklyn Center officials:

We're calling on you to reject Kim Potter's resignation and FIRE her immediately for the murder of Daunte Wright. Potter's reckless, dangerous, and racist decision to open fire led to Daunte's death and put bystanders, other drivers, and Brooklyn Center community members in danger.

Firing the police officer who murdered Daunte Wright is the absolute bare minimum. Potter and all officers involved must be held accountable for murdering a 20-year-old Black man and inflicting reckless, wanton violence in Brooklyn Center.

You must take immediate action to protect Black Minnesotans. We're calling on you to fire Kim Potter and the officers involved in the murder of Daunte Wright. To end this cycle of police violence, we also call on you to uplift the demands of organizers and activists in Brooklyn Center and the Twin Cities and fund non-police programs that protect Black people and invest in Black lives.