The Student Debt Crisis Is a Matter of Racial and Economic Justice! #EliminateStudentDebt | ColorOfChange.org

The Student Debt Crisis Is a Matter of Racial and Economic Justice! #EliminateStudentDebt

The Student Debt Crisis Is a Matter of Racial and Economic Justice! #EliminateStudentDebt 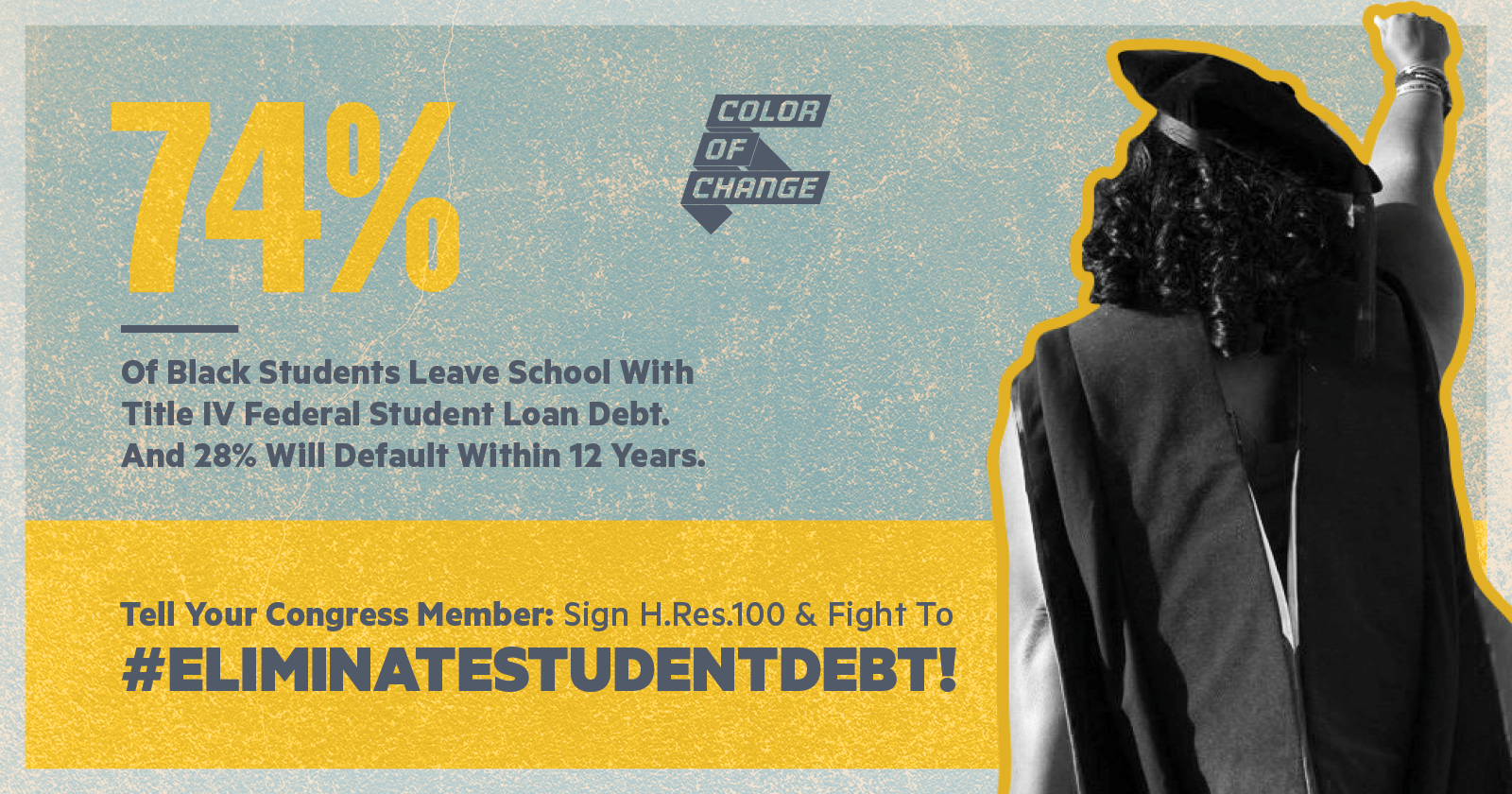 On January 31, 2022, some 45 million American borrowers—disproportionately Black and low-income—will be dealt yet another devastating financial blow. The student loan forbearance is set to expire, and those elected to represent and advocate the needs of our communities have made a conscious decision to ignore the far-reaching impacts of the student debt crisis and refuse to endorse broad-based elimination.

From slavery’s institutionalized theft to widespread pay inequities, Black and low-income communities have long faced structural and systemic barriers to college access and affordability. An estimated 74% of Black students leave school with Title IV federal student loan debt, compared to 55% of white students. And upon graduation, Black students owe $7,400 more than their white counterparts—an amount that skyrockets to $53,000 after a four-year period. With a student debt load that far exceeds our income, let alone our ability to repay, Black borrowers default at almost six times the rate of white borrowers and carry a median debt-to-income ratio (82.42%) that renders our community ineligible for qualified mortgages or competitive auto loans. As our communities remain the hardest hit by the COVID-19 pandemic and the slowest to recover, it’s clear that absent government intervention, Black and low-income borrowers will continue to endure perpetual cycles of debt and default.

Broad student debt elimination is a race-forward, equitable, and progressive solution to the student debt crisis. Aside from eliminating the economic angst of 45 million borrowers, it would have astronomical effects for Black communities—who would receive the largest proportional reduction in their debt-to-income ratios across all income distributions. This would significantly improve Black homeownership rates, expand the Black middle class, and thus reduce the Black-white wealth gap.

Show solidarity with Black and low-income borrowers. Demand that your representative co-sponsor H.Res.100—the U.S. House resolution that calls on President Joe Biden to eliminate up to $50,000 in student loan debt per borrower. The federal government owns 92% of student debt and has the power and authority to liberate our communities from lifelong debt. The countdown begins. #EliminateStudentDebt

Below is the letter we’ll send to your U.S. Representative:

Since March 2020, the federal student loan forbearance has been a critical lifeline for Black and low-income communities. For the first time in our lives, we’ve been able to meet rent payment deadlines, contribute to our 401(k) retirement plans, and come closer to achieving milestones that would have otherwise been impossible (e.g., homeownership, parenthood).

But when the student loan forbearance expires, some 45 million Americans will be pushed into financial ruin because you were complacent with the $1.8 trillion student debt crisis and its disparate impact on Black and low-income communities—who’ve faced systemic and structural barriers to college access and affordability.

Government intervention is needed; and broad student debt elimination is the only viable policy solution. It would alleviate the economic angst of 45 million borrowers and their families, expand and solidify the Black middle class, improve Black homeownership rates, and significantly reduce both the racial and gender wealth gaps.

We’re asking you to represent the needs of those who made your election possible by co-sponsoring H.Res.100 and making student debt elimination a national priority. The federal government owns 92% of student debt and has the power to ensure that higher education is accessible and affordable to those with limited financial resources.