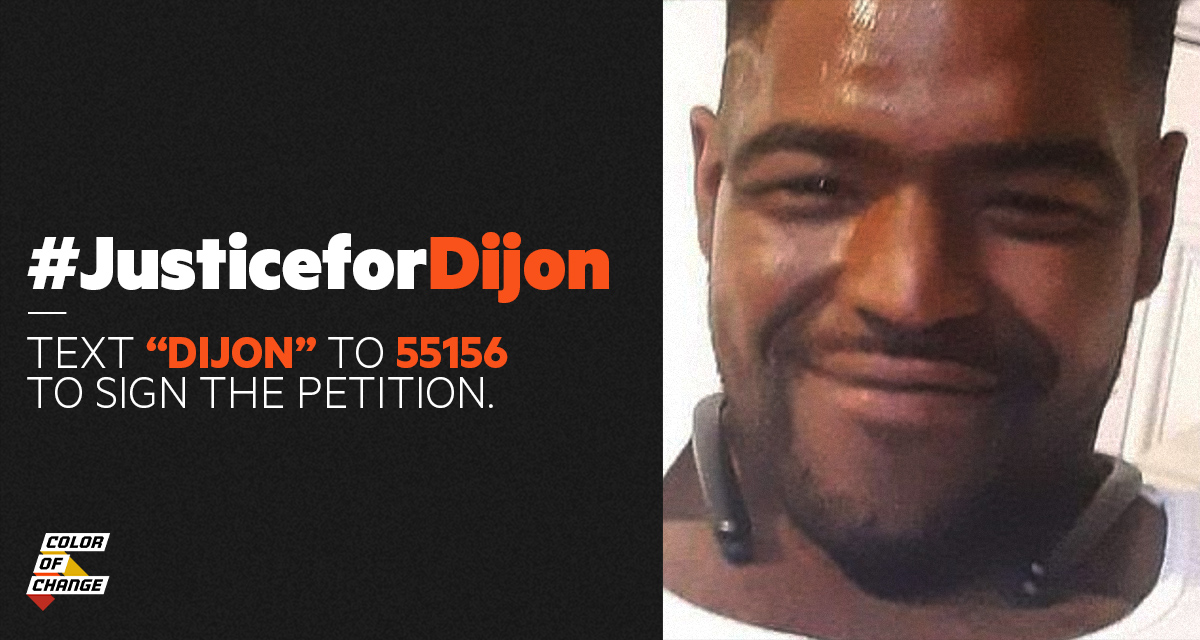 UPDATE: An independent autopsy investigation has revealed that Dijon was shot 15 times by Los Angeles police. Seven shots were fired by deputies into Dijon's back, including his arms and hands. What killed Dijon was the shot to his lung. From the audio, you can tell that there were three or four shots, a pause, then an additional 15 shots. Dijon died a slow painful death in the street in front of the police. The autopsy concluded that officers continued to shoot at Dijon, even after he was dying on the ground. The officers even continued to call for back-up after Dijon was lying down in the street. Dijon did not pose a threat to these officers, yet the Los Angeles Sheriff's Department (LASD) has said NOTHING to account for their actions in response to the autopsy report.

That's why we must keep up the pressure on District Attorney Jackie Lacey -- it's time for her to intervene and ensure these killer cops are held accountable.

See below to learn more about what happened.

Now officials from the Los Angeles Sheriff's Department (LASD) are reporting that a handgun fell from Dijon's belongings as he attempted to run away from the officers, making the deadly altercation even more outrageous. Upon seeing the gun on the ground, the deputies opened fire and shot at Dijon more than 20 times. At this point, Dijon posed no threat to these officers -- he was simply afraid, panicking, and running for his life. Yet Dijon was shot in the back multiple times.

Bottom line: Dijon's attempt to get away from officers did not warrant a death sentence. The deputies had no right to take his life. Dijon was simply minding his own business and riding his bike when police accosted and murdered him.

This is just the latest iteration in a long line of Black people who are brutalized and murdered by the police. Just last week we saw Jacob Blake, another 29-year-old Black man, who was shot several times in the back in front of his children. Jacob is now paralyzed from the waist down. We refuse to see any more of our loved ones killed at the hands of the police with no accountability.

For years, District Attorney Jackie Lacey has failed to hold killer cops accountable. Since taking office in 2012, hundreds of people have been killed by law enforcement in LA county. Yet, DA Lacey has not brought a single charge against an officer for deadly force.

In the case of Brendon Glenn, yet another Black man who was murdered by LA police in 2015, even the Police Chief, Charlie Beck, recommended criminal charges. Jackie Lacey’s response? She refused to prosecute and even defended the officer in an 83-page memo. She also refused to prosecute Ed Buck, a white man who preyed upon and tormented countless young Black gay men in LA. And she consistently relies upon the testimonies of corrupt law enforcement officers.

That's why we're calling on Los Angeles District Attorney Jackie Lacey to intervene. DA Lacey can ensure these officers face criminal charges for their blatant disregard for Black life. But we need your help to put pressure on DA Lacey NOW.

Dijon Kizzee was a 29-year-old Black man who was needlessly shot and killed by LA police during a “bicycle code violation” stop yesterday. You have an ethical obligation to address police misconduct and abuse of power -- we are looking at you to hold these cops accountable by filing charges against them.

During your tenure, hundreds of Black and brown people have been subjected to violence and brutality at the hands of the police. It's time for you to put a stop to the corruption and violence that runs rampant and ensure justice for some of our most vulnerable communities.