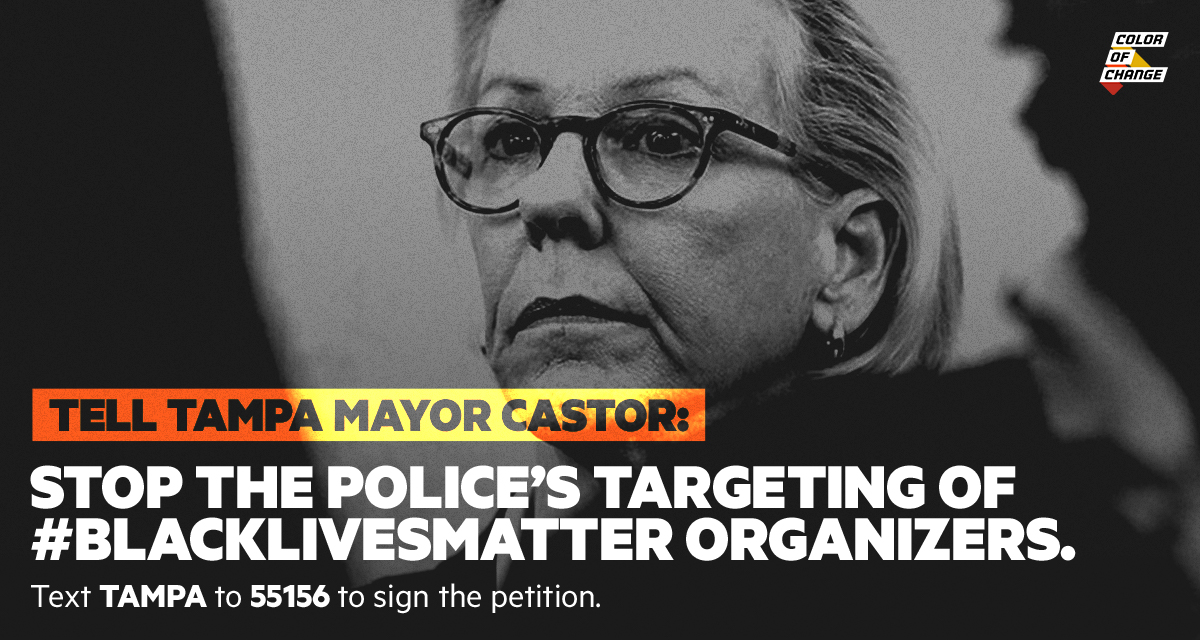 UPDATE: Victory! Over 50,000 Color of Change members came together to demand justice for Tampa organizers -- State’s Attorney Andrew Warren has announced that all charges against Tampa activists including Sadie Dean, Jae Passmore, and Torrie Grogan have been dropped.

In less than 10 days, we sent a clear message to Tampa police: we will not tolerate violence and retaliation against Black and brown people fighting for justice. And our fight is far from over. Many more activists still face criminal charges that have not been brought to the national spotlight.

Corruption and recklessness are running rampant in the Tampa police department, and it starts with Police Chief Brian Dugan. At every turn, he’s incited & encouraged racist violence against activists, and for that, he must go. We’re looking at Mayor Jane Castor to do her job and end this police harassment and abuse of power.

Sign the petition. We must continue to put pressure on her to remove Dugan from office NOW.

To get more information about what happened see below.

Sadie Dean was home alone when a man posing as maintenance personnel knocked on the door. When she answered, nine tactical officers, barged into her apartment and arrested her. They yelled at her and created such a scene that her neighbors came out and witnessed the violent arrest. The abuse continued as she was transported to jail - the officers drove violently, inexplicably transferred her into two additional transportation vehicles, all the while verbally harassing her throughout.

And while she was released on bail, and home with her family, Sadie still faces criminal charges and emotional and psychological trauma from the ordeal of being arrested. All of this because Sadie attempted to cut off harmful contact -- by closing a door -- to prevent an escalation in physical violence with counter-protesters who were determined to get into a physical altercation with Black Lives Matter protesters more than two months ago.

This clear violation of Sadie’s home and her person is part of a systematic effort to intimidate and stop Black people from demanding justice. Throughout the month of August, several protesters have been targeted, harassed, and arrested by Tampa police officers. At least 3 other protesters have been unjustifiably arrested for the same confrontation that led to Sadie's charges. Jae Passmore is an activist in Tampa who was hospitalized after being hit by a truck whose driver had yelled anti-Black messages at protesters. The driver faces no charges but Jae was targeted by police for arrest in another clear indicator that protest leaders are being ruthlessly targeted by law enforcement.

Worst of all Police Chief Dugan is encouraging this violence against activists and organizers. Several protesters have witnessed Dugan's racism first hand, Jae Passmore even stated that because of Dugan's comments, counter-protesters feel emboldened to, "start stepping up," and express, "white supremacist vigilante violence." And the reaction from Mayor Jane Castor? She’s been quick to come to the defense of Dugan and the entire corrupt Tampa Police Department, making it very clear that she has every intention to invest in the police, not our people who are being brutalized day in and day out. Dugan poses a real threat to Black people in Tampa, and for that, he must go.

To be clear, this isn't just about Sadie and Jae. This is about all Black organizers who exercise their constitutional right to protest state violence. Tampa police officers are clearly trying to make an example of these courageous fighters. If successful, the Tampa police department will undoubtedly send a chilling effect throughout all activist communities in Tampa.

Enough is enough. The police need a clear signal that this harassment and targeting will not be tolerated. That's why we're calling on Hillsborough County State Attorney Andrew Warren drop these ridiculous charges against these Black Lives Matter activists and Mayor Jane Castor fire Police Chief Brian Dugan. Only State Attorney Warren, who played no part in these cases so far, has the power to ensure that these unjustified arrests don't turn into real charges or convictions. But the police report to Mayor Castor and only she can cut this retaliation off at the source by firing the police chief and replacing him with a leader who will not respond to critiques with harassment and intimidation.

Sign the petition. Demand justice for our people in Tampa.

For the last three months, the Tampa Police Department has launched a systematic effort to intimidate, harass and arrest Black Lives Matter activists in Tampa. This is state repression and the criminalization of dissent.

Police Chief Brian Dugan is clearly corrupt and must be reined in. The targeting and harassment of local activists by law enforcement cannot be allowed to continue. It's time for your office to step up and intervene in this crisis.